Logic is a fugitive in ‘Dark Blue’ debut 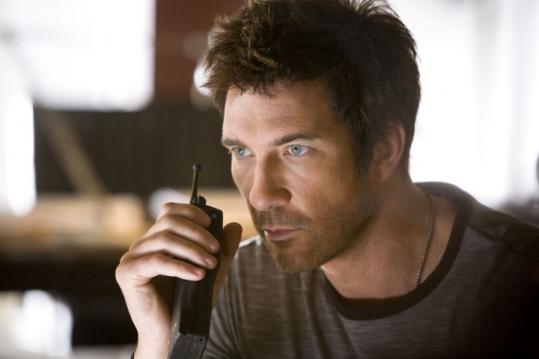 TNT has been constructing a new neighborhood in a cable backlot. It’s not exactly a high-end development - the building materials are a mixture of the tried-and-true and the been-there-done-that. But the first residence (“The Closer’’) is remarkably sturdy and attractive, and the second (“Saving Grace’’) is reinforced with durable, unbendable steel (Holly Hunter).

Alas, every newer structure TNT has put up in the past year has been kind of shaky. “Leverage,’’ “Raising the Bar,’’ and “HawthoRNe’’ are almost willfully ordinary, as if the network is afraid that a bit of originality might alienate viewers. These are shows that go halfway there, with decent casts and strong production values, but then back off into mediocrity. And, beginning tonight at 10, “Dark Blue’’ joins their ranks, an unambitious cop drama subsumed by undercover cliches. Produced by Jerry Bruckheimer, whose “Cold Case,’’ “CSI: NY,’’ and “Without a Trace’’ repeat on TNT, “Dark Blue’’ is a wan effort.

Dylan McDermott is the star, in the way Timothy Hutton is the star of “Leverage’’: the experienced guy at the helm of a younger ensemble. He is Carter Shaw, an LA undercover cop whose jobs are top-top-TOP secret, and who one character calls “Prince of Darkness’’ because he’s such a workaholic and renegade. Carter leads his undercover crew - the newly married Ty (Omari Hardwick), the hotheaded Dean (Logan Marshall-Green), and mysterious newbie Jaimie (Nicki Aycox) - with a paternal intensity. If you saw Patrick Swayze’s “The Beast,’’ or Joe Pantoliano’s “The Handler,’’ both TV series with similar setups, you get the idea.

The characters are not especially dimensional, and McDermott’s flat edginess as Carter doesn’t help. But what’s worse about “Dark Blue’’ is the sloppy plotting. Maybe the writers skip steps because they’re cramming complicated cases into an hour, or maybe, like the “Leverage’’ writers, they just don’t let logic get in the way. Logic can be such a bummer sometimes! It’s summer! Relax! But I find it hard to lose myself in a story that doesn’t bother to address obvious glitches. No amount of violence and ambient lighting - and there is plenty of both in “Dark Blue’’ - can distract me from a puzzle that doesn’t fit together even loosely.

Maybe the characters will go on to become distinctive; they have on the more lighthearted “Leverage,’’ which returns tonight at 9. But if that happens, I’ll still feel the need for a clever, interlocking script. It’s the foundation on which the best crime series are built.