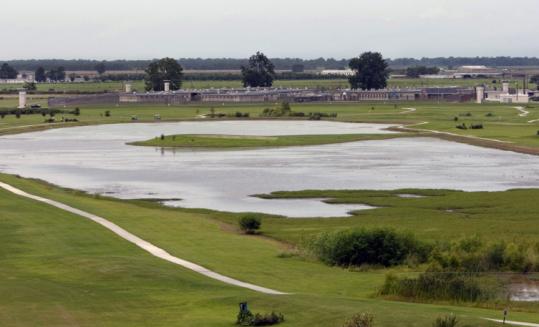 Prison View Golf Course at Louisiana State Penitentiary in Angola, the only course inside the confines of a US prison. (Judi Bottoni/Associated Press/File)
By Stacey Plaisance Associated Press / June 30, 2009
Text size – +

NEW ORLEANS - A golf course tucked among 18,000 acres in Louisiana’s scenic Tunica Hills would seem an ideal vacation getaway if it was not on the grounds of the sprawling state penitentiary.

The only course inside the confines of a US prison captured the attention of the Golf Channel, which tonight at 9 is highlighting the Prison View Golf Course in the “Golf in America’’ series.

The 10-episode series, which premiered this month and runs through Aug. 25, chronicles more than 20 inspirational stories about golf and those who love the game. One episode follows soldiers who use golf for physical and mental therapy after returning from Iraq and Afghanistan. Another is about the rebuilding of a New Orleans golf course after Hurricane Katrina in 2005.

“Golf ends up allowing you to enter some really interesting places in the human experience,’’ said Scott Walker, the correspondent who visited the prison for the series. “They are golf stories that transition into life stories.’’

Walker said producers were drawn to the golf course at the penitentiary, which is a series of prison camps employing more than 1,500 people on a former plantation at the isolated town of Angola, because of its uniqueness.

“We really wanted to go somewhere off the beaten path,’’ Walker said.

The prison’s nine-hole course, with two tee boxes at each hole for an option to play 18 holes, is cared for by the inmates and is open to the public. The inmates are not allowed to play, but they are granted the opportunity to work the grounds as a reward for good behavior, said Burl Cain, warden at Angola since 1995.

Caring for the golf course is part of a vocational program that trains inmates to maintain the course to make them employable after their sentence.

“They learn how to care for the plants, the greens,’’ Cain said. “They also learn about the herbicides, the mowing, the varieties of grass, the use of sand and even drainage. It’s very complex.’’

Cain adds that even those who will never be released - most of the 5,000-plus inmates are violent offenders and more than half are serving a life sentence - have an incentive to work on the almost 50-acre course: It is, he says, the closest thing to freedom many will experience.

“The golf course is so large and open,’’ Cain said. “It’s a beautiful place to work. It has roughs and water, even alligators.’’

The course was built about seven years ago as an incentive to keep resident staff on the 18,000-acre prison site - additionally guarded by the currents of the Mississippi River and the snake-infested Tunica Hills - in case of an emergency, Cain said.

During his January visit, Walker talked to inmates, including one serving life for killing his wife. The inmate was proud of his involvement in the construction of the golf course and his ongoing role in its maintenance.

“What I learned is that everyone needs hope in life, whether you’re behind bars or not,’’ Walker said.