Not just a gigolo

In ‘Hung,’ another misguided but likable underdog tries to find his way 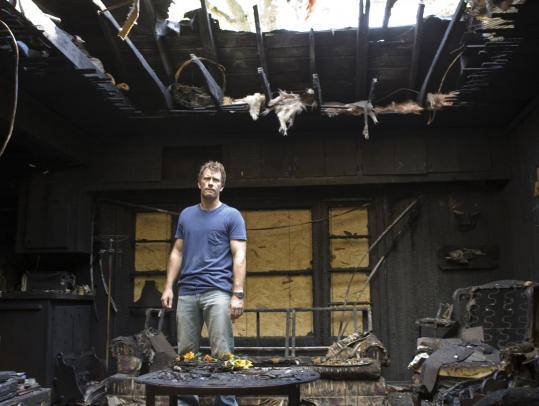 CHUCK HODESThomas Jane plays Ray Drecker, a down-on-his-luck ex-jock who becomes a male escort after losing his home to a fire and custody of his kids to his ex-wife. (Chuck Hodes)
By Matthew Gilbert Globe Staff / June 26, 2009
Text size – +

There’s an argument to be made that every single story about men and power, particularly when guns are involved, is, at least metaphorically, about penis size. And the spirit of Dr. Freud would of course need to be invoked along the way. But HBO’s new comedy “Hung’’ may be the first TV show to take the theme quite literally, as its middle-aged hero finds a quick solution to his small bank account and his shrinking self-esteem with his large penis.

Actually, “Hung,’’ which premieres Sunday at 10 p.m., aspires to be something more than a haven for porny double-entendres. Our hero’s endowment is only a minor, attention-getting plot point. This promising series is really about a failed optimist, driven by the recession and his own midlife depression to sell his body to rich ladies. Based on the first four episodes, Ray Drecker (Thomas Jane) has the potential to become another one of cable’s interestingly gray characters, like the pot-peddling mom in “Weeds’’ and the meth-making dad in “Breaking Bad.’’ He’s so very sympathetic, and so very misguided.

“Hung’’ is set in Detroit, the symbolically correct location for a show about the Death of the American Dream circa 2009. Ray is a former all-American jock, a financially strapped high-school coach, and the divorced father of twin teens. After a house fire, he loses custody of his kids to his self-absorbed ex-wife, played with an unnervingly helium-tinged voice by Anne Heche. He hits bottom, living alone in a tent on his property, harassed by his nouveau riche neighbor.

But in one of TV’s odder kismet moments, Ray reconnects with a former one-night stand at a get-rich-quick seminar. She’s a flaky poet with a “Proust’’ tattoo named Tanya Skagle (Jane Adams), and she will become Ray’s marketing director. Yup, the guy has a poet for a pimp.

Like many half-hour cable series, particularly those on Showtime, “Hung’’ leans heavily on the black comedy, but pathos is never far away. “I used to be a big deal,’’ Ray tells us in his voiceover, “I used to be going somewhere.’’ He reflects some of the faded hometown glory of John Updike’s Rabbit Angstrom, at least before he takes charge of his life and Googles “how to make money with big penis.’’ And it’s this grounding in character drama that helps “Hung’’ transcend its gimmicky genital premise.

For me, the best part of “Hung’’ is Adams, who makes Tanya a brittle joy with neurotic lines such as, “My mother was right, I’m too desperate to be liked.’’ In the world of “Hung,’’ Tanya is the unlikely visionary, branding the gigolo business “Happiness Consultants’’ and pursuing a sassy personal shopper (a memorable Rebecca Creskoff) for wealthy connections. While prostitution initially feels like a comedown for Ray - “I always wanted to be a product when I grew up,’’ he says with irony - it becomes a panacea for Tanya. You can see her growing less pathetic with each new idea, each new way to translate Ray’s services for a feminine sensibility. “Happiness Consultants’’ refrigerator magnets? Why not. Adams proves she’s more than laugh-track deep (she was Mel on “Frasier’’) as she makes Tanya into the prime mover in the show’s team of losers.

Thomas Jane is far less dynamic than Adams - perhaps intentionally so. Ray is a guy’s guy with a smug streak, a low-key dude surrounded by high-maintenance people - not just Tanya and his Botox-loving ex-wife but his moody twins, Damon (Charlie Saxton) and Darby (Sianoa Smit-McPhee). Jane plays Ray with little more than a monotone voice and a hangdog face. Maybe, as Ray learns to be less of a caveman, and his moonlighting career leads to personal growth, Jane will bring on more dimensionality. Otherwise, the blandness could grow tiresome.

Created by husband-and-wife team Colette Burson and Dmitry Lipkin (“The Riches’’), and executive produced by Alexander Payne (“Sideways’’), “Hung’’ is not in the league with HBO’s best comedies, from “The Larry Sanders Show’’ to “Sex and the City.’’ It’s hard to imagine this premise yielding years of rich development. But, if you can get past the title, “Hung’’ does offer a warm portrait of underdogs, as well as another piquant moral quandary for viewers. The writers want you to root for Ray and Tanya, as they try to pull themselves out of helplessness. But then again, it’s a little strange to be cheering when self-objectification becomes a form of self-help.