From a rich life, a rich plot 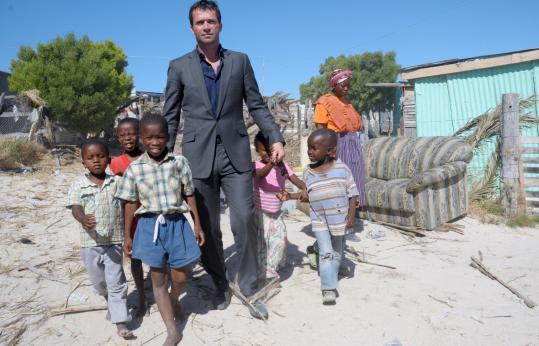 In "The Philanthropist," James Purefoy portrays a wealthy man who travels the developing world to be "eyeball to eyeball" with his beneficiaries. (Kelly Walsh/ NBC)
By Joanna Weiss Globe Staff / June 24, 2009
Text size – +

Teddy Rist is not Bobby Sager.

Rist, the main character of NBC’s new drama “The Philanthropist,’’ is a fictional British womanizer, estranged from his wife, coping with the death of his young son. Sager is a real-life Malden native with a thick Boston accent who has traveled through the developing world with his wife and two kids.

But the two men share both untold wealth and a philosophy of giving as adventurous as it is telegenic: Don’t write a check. Go someplace and do the giving yourself, “eyeball to eyeball,’’ as Sager likes to say.

It’s something that Sager, the real-life inspiration for the show, which premieres tonight at 10, has been doing for years. His roots are still in Boston; he bought the parquet floor from the old Boston Garden at an auction nearly a decade ago. But when he’s not at his sprawling apartment on the Common, he’s roaming the world with the charity he calls the Sager Family Traveling Foundation and Roadshow.

Over the last decade, he has financed a series of ambitious projects, from outfitting Tibetan monks with modern technology, to training female doctors in Afghanistan, to giving women in Rwanda - widows of genocide victims and perpetrators - a series of microloans.

Sager made his fortune as president and partner of Gordon Brothers, a Boston liquidator. But creators of the TV series came to know him as a result of his longtime friendship with Sting, the frontman of rock band The Police and an environmental activist.

Photographs from Sager’s travels were on display during the Police reunion tour. They will also be featured in his upcoming book, “The Power of the Invisible Sun,’’ in which he shares his philosophy, sounding like a mix of corporate chief executive and New Age guru.

Like Teddy Rist - whose fictional business buys and sells natural resources - Sager runs his global charity like a capitalist, believing that an entrepreneurial spirit, mixed with the power of the Rolodex, can get things done that a government can’t.

It’s an unconventional notion and a fine tale for television, said Tom Fontana, the veteran producer who developed and runs the show.

“The idea that you can take capitalism - which, being an old hippie stoogeball, I’ve always thought to be the enemy of change - and have that be the element that causes the change is just, to me it’s a revolutionary idea,’’ Fontana says.

Through Sting’s wife, Trudie Styler, Sager became an executive producer of the 2006 film “A Guide to Recognizing Your Saints.’’ On the set, he met another producer, Charlie Corwin, who had a development deal with NBC.

Corwin thought Sager’s life could be the basis of a series, and brought his idea to Fontana, the former executive producer of “Oz’’ and “Homicide: Life on the Street.’’

NBC Entertainment copresident Ben Silverman, meanwhile, had gone with Sager and Corwin to a Police show in Las Vegas. So when Corwin pitched the show to NBC a few week’s later, he recalls, Silverman knew it was based on Sager before Corwin had a chance to utter the name.

Silverman gave the go-ahead to the show based on the pilot script alone, ordering 13 episodes. Each episode, Fontana says, will follow Rist on a mission to another place, from Burma to Nigeria to Paris to San Diego.

Sager serves as a consulting producer, and has traveled with Corwin to Africa and Israel for research. The producers acknowledge that Sager found Rist’s many flaws to be unsettling. But they say they had to create a character troubled enough to anchor a television show, and to grow.

“We wanted him to have a hole in his soul that he needed to fill, and that philanthropy became the thing that he found that could fill it,’’ Corwin says. “At first he’s not very good at it . . . his approach is a little clumsy, or it’s a beginner’s approach. He’s going to throw money at things.’’

As the series goes on, Corwin says, Rist will learn that “he can’t solve these problems with his currency. He has to actually become the currency himself.’’

“That’s why I agreed to be involved,’’ Sager says. “The possibility that . . . it would stimulate [viewers’] thinking in how to make a difference, and maybe even stimulate their doing.’’

Actor James Purefoy - perhaps best known as Marc Antony in HBO’s “Rome’’ - plays Rist with a wink and an occasional pout. He’s a bad boy just learning what it feels like to be good.

Still, there are moments when he seems more specifically Sager. In tonight’s episode, working to bring a cholera vaccine to a Nigerian village, Rist says he’s going to help people “eyeball to eyeball.’’

Purefoy inserted the words on the set, Fontana says. “He had just met Bobby, so he was completely converted.’’

Correction: Because of a reporting error, a story in the Business section on June 24 about philanthropist Bobby Sager and the NBC series “The Philanthropist’’ misstated the title of Sager’s upcoming book. It is “The Power of the Invisible Sun.’’