Even philanthropy shows off its vices 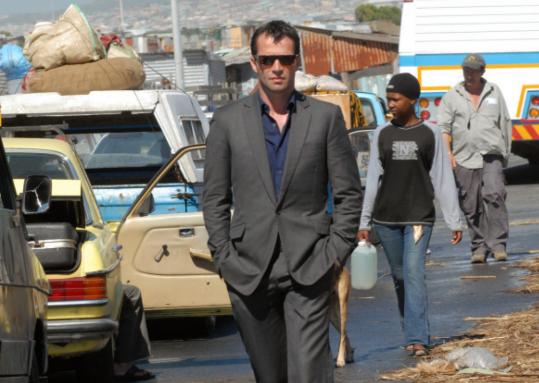 What is an Obama-era TV show? NBC’s “The Philanthropist’’ calls out for that moniker by giving us a billionaire playboy who decides to devote his life to charitable works. Reeling from a personal tragedy, Teddy Rist (James Purefoy) discovers that, as Barack Obama promised, there’s nothing laughable about community service, even global-community service. In tonight’s premiere, at 10 p.m. on Channel 7, we meet the roguishly handsome hero riding barefoot on a motorbike through a Nigerian jungle, transporting cholera vaccine to natives after having saved a boy from a hurricane. It’s all very James Bond, Agent $007,000,000,000.

But Obama-era TV -whatever that will be - is probably going to emerge in a more organic and less obvious way. “The Philanthropist’’ strains to make giving sexy, to show that a guy can perform brave international humanitarian feats and still find time for hard liquor at lunch and an orgy in his hotel room at night. With the world in a post-Bush economic crisis, with CEOs infamous for bonus packages and layoffs, Purefoy’s Teddy Rist is going to stop being such a cold greed-head. He’s going to bail out the truly needy - the global Main Street - and have a good time doing it.

And yet “The Philanthropist’’ nonetheless traffics in stark imperialist imagery, while affirming the dominance of American power and money. It’s hard to fault a drama that celebrates altruism and tries to glamorize social conscience. But I found myself cringing at the condescending scenes of our rich white savior wandering among the Africans with their colorful outfits and drum music, his checkbook at the ready in case he needs to bribe a local.

Written and executive produced by Tom Fontana, of “Homicide’’ and “Oz,’’ and inspired by the hands-on charitable work of Bobby Sager, the Boston-based entrepreneur and philanthropist, the show makes a pass at addressing its own patronizing potential. At one point, a Nigerian doctor takes Rist to task for his self-aggrandizement: “This is about you,’’ she snaps at him, “playing the role of the charming rich businessman who travels the globe getting his hands just dirty enough to go back home and tell his American friends how meaningful his life is compared to theirs.’’ I’m not sure “The Philanthropist’’ itself overcomes that accusation, even while Rist ultimately makes a believer of the doctor. Perhaps Fontana plans to explore the complexities of Rist’s motives further as the series develops; that might add interesting moral layers to the show and undercut any smugness.

Purefoy, who was Mark Antony in “Rome,’’ is a natural as a womanizing, partying charmer. He is the latest Brit to star on an American series, and he brings plenty of charisma to the screen - enough to make the preposterously dangerous situations easy to buy. (Jeffrey Donovan on “Burn Notice’’ also has that knack.) The supporting cast has less to offer, as they labor in Purefoy’s shadow. Michael K. Williams, unforgettable as Omar on “The Wire,’’ is almost nonexistent as Rist’s driver, as are Neve Campbell and Jesse L. Martin as Rist’s business partners. Perhaps Rist will donate some screen time to them for their stories, but I doubt it.