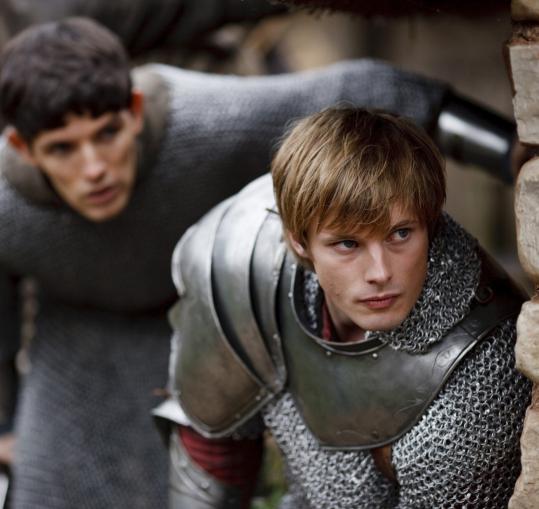 The CW has “Smallville,’’ about Superman as a teenage hunk, and now NBC has what amounts to “Camelotville.’’ “Merlin,’’ a summer series imported from the BBC, chronicles the early days of Arthurian legend, when the fledgling magician was still honing his craft. Essentially, the show is a portrait of the wizard as a young man, with the impossibly handsome Prince Arthur as his best frenemy and Guinevere - “most people call me Gwen’’ - as his possible love interest.

This kind of invented back story can be fun, as J.J. Abrams demonstrated with his “Star Trek’’ movie. It allows the writers to move freely outside the bounds of the myth - and yet explain the myth and add layers to it. Sadly, the writers of “Merlin,’’ which premieres with two episodes tomorrow at 8 p.m. on Channel 7, fail to develop any very original Arthurian origins. The middling show plays too much like “The O.C.’’ with swords, crowns, and a cheesy CGI dragon (voiced by John Hurt).

Merlin (Colin Morgan) has been sent by his mother to live in Camelot with the court physician, a bachelor named Gaius (Richard Wilson). Merlin quickly gets into a fight with a bully, who just happens to be Arthur (Bradley James), but the two guys quickly establish a bond. And in secret meetings with the talking dragon, who spouts wise cliches such as “None of us can choose our destiny, and none of us can escape it,’’ Merlin learns that his important fate is to protect the prince.

Twist: At the time, King Uther (Anthony Head, from “Buffy the Vampire Slayer’’), Arthur’s father, has declared sorcery illegal. And so Merlin must cast his spells on the down low. “If I can’t use magic, I might as well die,’’ he moans to Gaius. Yup, he’s “in the closet,’’ like Clark Kent, and not even Arthur knows his secret. And as on “Smallville,’’ the “Merlin’’ writers occasionally toy with the outsider subtext. It’s a welcome bit of playfulness in an otherwise flat action-adventure milieu.

The casting, like the special effects, is bland. Colin Morgan has interesting angles to his face, and the potential to convey a smirky charm. But he also too closely recalls Ashton Kutcher, and he doesn’t have much chemistry with the other younger characters. And that makes sense, because Bradley James and Angel Coulby as Gwen are likable but unremarkable. Perhaps as the series develops, the story of young Merlin will take some unexpected detours. But so far, “Merlin’’ makes Camelot all too familiar.