Nurse Hawthorne is too good to be true 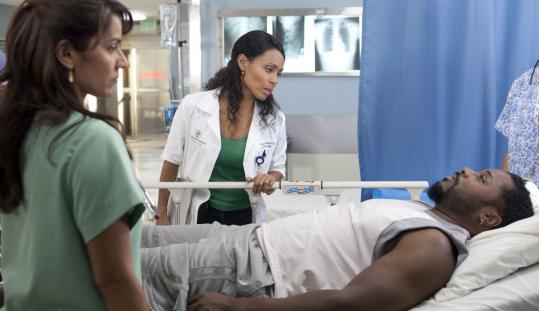 At the height of "ER," doctors were the gurney-side heroes. In the heat of crisis and chaos, they prevailed over the broken American healthcare system - and yes, gunmen, bombs, floods, hostage situations, and other sweeps events - to save lives. They were emotionally flawed, of course, but so much more believably human than, say, Marcus Welby, who came off like a cough-drop pitchman. They were real fantasies.

With TNT's new "HawthoRNe," as well as Showtime's "Nurse Jackie," the tide is turning against the doctors, with the nurses on the crest of the next wave. In these two hospital series, the MDs are Mighty Dumb - fickle, feckless, hostile, medically unsound - while the RNs are Really Nurturing and Really Nice. Maybe "House," which endlessly indulges Dr. Diva, and "Grey's Anatomy," with its team of chattering physician-narcissists, have fomented a backlash? Or maybe it's just one of those uncanny TV coincidences that finds doctors demoted to comic relief.

"HawthoRNe," which premieres tonight at 9, is a vehicle for Jada Pinkett Smith, who plays the chief nursing officer at a Richmond hospital. And I mean "vehicle" in the beloved-star sense of the word, since the show is all about making Smith's nurse Christina Hawthorne into nothing less than a saint. While "Nurse Jackie" gives Edie Falco's Jackie a testy temperament and an ever-spinning moral compass, "HawthoRNe" presents us with an even-keeled, iron-willed angel. Smith's Christina, also the widowed mother of a rebellious teen girl, is so unblemished, she's blandly off-putting. When a show wants me to worship a character this feverishly, I can't help it, I resist.

In the premiere, Christina tries to talk a patient off the roof, shows unerring compassion to a prickly homeless woman, firmly but bemusedly disciplines her daughter (Hannah Hodson), stands up to her evil mother-in-law (Joanna Cassidy), and plays peacemaker between a condescending doctor and nurse Ray Stein (David Julian Hirsh). And all of this occurs on the first anniversary of her husband's death, which means we get to see her chit-chatting with an urn of his ashes - just in case she wasn't sympathetic enough already. When Michael Vartan's chief of surgery Tom Wakefield tells her, "You should go home," she responds like a martyr: "This is home, Tom."

The actors around Smith don't help matters. They are flatly likable, no more and no less. Suleka Mathew is Bobbie Jackson, ace nurse and best friend; Vartan is sweet and unknowable. Only Cassidy, who was unforgettable as Margaret Chenowith on "Six Feet Under," has the potential to bring on some juice. Maybe as the abrasive mother-in-law who happens to be a member of the hospital board, she can push Christina out of her unwavering bubble of goodness.

Smith manages to breeze through "HawthoRNe" without oozing sanctimony. But unlike Christina, she's not a miracle worker. If there were some complexity afoot in the writing, perhaps she could hint at hidden, less unnervingly calm parts of Christina's character that will emerge later. But "HawthoRNe" seems bent on being reverential, complete with musical montages meant to break our hearts. It's not awful, by any means, just too good to be true.