It's fun to watch, painful to experience 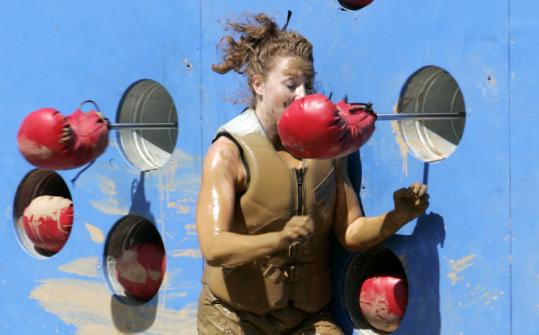 ADAM LARKEY/ABC VIA AP/FILEThe boxing glove section is one of many bruising elements of the Qualifier, the obstacle course for the ABC show ''Wipeout.'' (Adam Larkey/Abc via Ap/File)
By Derrik J. Lang Associated Press / May 27, 2009
Text size – +

This was supposed to be an amusing diversion, but I wanted nothing more than to curse like I had never cursed before.

I kept my profanities in check, though, because I wasn't alone: 20 video cameras leered at me like a thousand eyes while I tackled the grueling "Wipeout" obstacle course.

There was nothing I could do but let the foam-padded rings toss me around as I attempted to crawl through to the other side of the gauntlet. I was exhausted; finishing the course seemed physically impossible. I just wanted it to be over, but I wasn't going to give up. After all, I had already been banged up by a big red ball and punished by a wall to get to this point. And the hurdles weren't the end of my challenge that day. There would be more pain to endure.

The producers of the breakout ABC hit game show, which begins its second season tonight at 8, had invited me to the outdoor set located on a sprawling ranch 40 miles outside Los Angeles to have a go at the infamous obstacle course on a chilly spring morning. In each episode, 24 contestants engage the Qualifier in hopes of moving forward in the contest and winning the $50,000 grand prize.

Me? I just agreed to do it for fun.

"The advice that I give to all contestants is speed and momentum," executive producer Matt Kunitz told me beforehand. "You really need to use your body's momentum to take you across the course."

The day I visited "Wipeout," the course was populated with silly food-themed barriers. There were essentially five impasses to overcome: a series of banana-shaped platforms swinging above a vat of mud, a wall of punching boxing gloves, the show's hallmark inflated floating balls, those torturous doughnut hurdles, and a swing from a platform onto a giant hot dog.

From the vantage point of my sofa, the "Wipeout" obstacle course always seemed akin to a Disneyland attraction or a giant Slip 'n Slide. In person, my perspective completely changed as I witnessed the Qualifier spit out beaten, bruised, and - in one instance - vomiting contestants.

It's nothing like a theme-park ride. Oh no. It's a brightly colored nightmare! Think Freddy Krueger with a box of Crayolas.

Though participants in "Wipeout" are insured by the production, the only safety equipment I was outfitted with was a lifejacket festooned with the splashy "Wipeout" logo and some lace-up ankle covers. That's it. No helmet. No pads. No cup. By the time I limped to the finish line, I had repeatedly dropped from the obstacles into gritty mud and chilly water. Kunitz later told me if I was actually participating in the show, my time would have qualified me for the next round.

Uh, no thanks. The excruciating experience - and glob of mud I blew out of my nose on the car ride home - was enough for me.

I haven't looked at a doughnut the same way since.