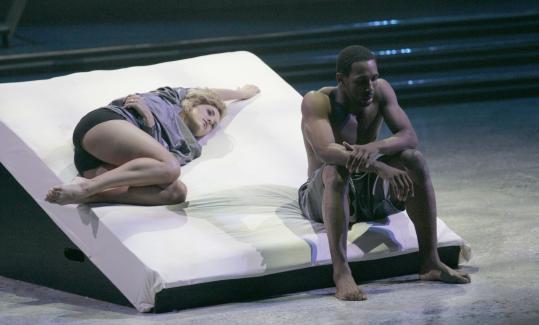 That's the main reason this "Idol" spinoff, which premieres its fifth season tonight at 8 on Fox, is TV's most satisfying reality competition, the one that manages the most potent mix of entertainment and bona fide artistry. The fact that it will be on the airwaves for months (Fox announced this week that it will launch a sixth season in the fall, shortly after this one ends) is welcome news. Imagine: real art on fall network TV.

What, you say? You know about dance because you watch "Dancing With the Stars"? Well, not quite. There is, indeed, some overlap: Three former "SYTYCD" contestants have gone on to be staff dancers on the popular ABC contest, teaching tango to the likes of Steve-o, the guy from "Jackass." They do an admirable job with their often-uncoordinated charges. But they're slumming, and they know it.

"Dancing With the Stars" is pure Velveeta, a cheery Vegas show awash in sequins and lamé. "So You Think You Can Dance" is the real competition. These dancers aren't learning how to hold their arms or trying to extend careers in reality TV; they're all trained, at least to some extent, with admirable technique and commitment to the craft. The choreography, complex and demanding, ranges from standard ballroom fare - the quickstep, the Viennese waltz - to hip-hop and modern dance.

The dances are often stories. Last season, we saw a hip-hop number about a workaholic and his suffering wife, a modern routine that had its dancers leaping on a mattress, another that made use of a freestanding doorframe and a swinging door. They're always provocative; one of last summer's winning routines was a pas de deux with barely clothed dancers. On "Dancing With the Stars," sexy is defined by the size of a bikini top. On "SYTYCD," the movement itself is erotic. How it has managed to air, consistently, on a network show remains one of TV's great and happy mysteries.

For quality control, meanwhile, we can thank executive producer Nigel Lythgoe, a former "American Idol" bigwig who left that show this season to concentrate on his international "SYTYCD" empire. He's a veteran hoofer himself; last season, he revealed that he had danced with Cyd Charisse. And as an on-air judge - the requisite British voice - he's Simon Cowell with value added. He doesn't mince words, but he harps on technique, and he's never afraid to laugh at himself.

He also makes sure to give credit to the choreographers. This show lionizes them, as it should, making household names out of the likes of modern choreographer Mia Michaels (who created the mattress routine) and a hip-hop duo named Tabitha and Napoleon (who channeled the workaholic). And since a different choreographer joins Lythgoe and ballroom veteran Mary Murphy every week, the judging, unlike on Lythgoe's former show, doesn't descend into monotony.

In former British model Cat Deely, meanwhile, the show has a surprisingly likable host: She wears dresses better than Heidi Klum and doesn't hesitate to kneel in her miniskirt to fix a dancer's shoestrap. And "SYTYCD" has managed to find a reasonable solution to the question of audience power. Unlike in "Idol," the judges here have a voice: Call-in votes place some contestants in a bottom group, but the judges determine who has to go home (after watching a series of often riveting solo dances).

No, "SYTYCD" isn't perfect. Murphy, the show's airy answer to Paula Abdul, still insists on YELLING HALF HER COMMENTS. But her camera time is brief. The star is always the dancing, and the dancers themselves.

Indeed, the worst thing about "SYTYCD" is what happens when the show is done: Most of the contestants quickly fade into obscurity. The where-are-they-now updates in the gossip mags reveal that most of them wind up in background roles, writhing around pop stars in music videos, dancing in the choruses of "High School Musical" films. They claim to be happy just dancing, and that might be true. But for entertaining us so deeply, they deserve center stage.

SO YOU THINK YOU CAN DANCE On: Fox, Channel 25