If you've got it, flaunt it!

That's been the premise of the "Real Housewives'' franchise. And no one's taking it more to heart than the ladies of New Jersey, whose show debuts Tuesday night. 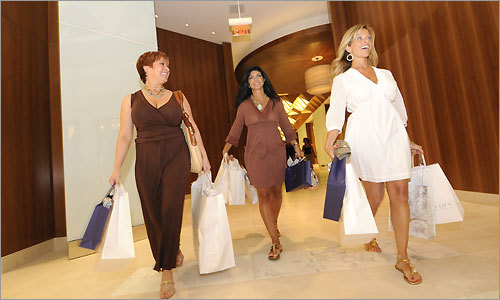 Recession? What recession ? If there's economic insecurity out there, it apparently hasn't made its way to Franklin Lakes, N.J., the setting for Bravo's latest "Real Housewives" docu-reality series. "The Real Housewives of New Jersey," which premieres Tuesday night at 11, exists in what seems, to many of us, an impossible world of French-chateau furniture and backyard waterfalls. Watching its five main characters kvetch and spend is like entering a fantasy world, or traveling down a wormhole to some earlier gilded age.

It's also totally believable, from start to finish: For all of its absurdity, this series feels more "real" than other popular docudramas such as MTV's "The Hills," its characters completely authentic. Some reality stars seem completely aware of the images they're building; every conversation feels calibrated to serve some future career in fashion, publishing, or reality TV. The varied "Housewives," by contrast, have built their lives and amassed their fortunes already. Now that they're fully realized, they feel they deserve recognition.

Their lack of self-awareness is intoxicating; it makes the premiere the most engrossing hour of pure TV escapism I've seen in a very long time. I watched nearly every moment with jaw agape: Don't they hear themselves saying things like, "My whole house has nothing but marble, granite, and onyx"? Don't they know that hating rich people is a quintessential TV experience? Do they care? They don't care! It's fabulous!

Compared to its predecessors in Orange County, Calif., Atlanta, and New York, "The Real Housewives of New Jersey" is the apotheosis of conspicuous consumption. Set in a town where every house has a hangar-size foyer with a massive chandelier, it follows what might be the closest to a group of true housewives the series has seen. "I think I'm one of the last generations to have the old-school attitude," one character, Caroline, says. "I live for my children, I live for my husband, My career is secondary."

Caroline also describes herself proudly as an old-school Italian matriarch - one of several ways the show toys with comparisons to HBO's "The Sopranos." The premiere opens with a montage of women driving, interspersed with shots of highway signs and houses whizzing by. "Let me tell you something about my family," Caroline says in a voice-over. "We are thick as thieves and we protect each other to the end."

This isn't Bruce Springsteen's New Jersey, but it's Jersey nonetheless. One of the best things about the "Housewives" franchise is the way it reminds us that regional differences persist. The Orange County women who launched the enterprise - as Bravo's way of capitalizing on the buzz from shows like "The O.C." and "Laguna Beach" - are bleached-blond, breast-augmented name-droppers who obsess over yachts and plastic-surgery procedures. The Atlanta ladies offer a glimpse into the wealthy black community, and find ways to use consumption as a joyous political statement. The women of New York try to mask obnoxious spending with supposed good taste: speaking French to restaurant waiters, waging territorial battles over charity events.

The New Jersey women, meanwhile, speak with thick accents and a particular sort of slang: breasts are "bubbies," as in "Jacqueline's heart is as big as her bubbies." They shamelessly enjoy the spoils of the nouveau riche. And they fight with each other, as all Bravo housewives do, though their spending patterns are far more interesting than any of their squabbles.

With this set, Bravo continues its tradition of near-impeccable casting, offering a range of rich-housewife archetypes. Caroline hovers over her children, who all work at the Brownstone, her husband's catering facility - though one of her sons, with her blessing, aspires to open a strip club. Her sister Dina has a nominal event-planning business at the Brownstone and an interest in playing tennis "because everyone who plays it, their legs are amazing."

Caroline's sister-in-law Jacqueline, a onetime single mother from Las Vegas, struggles to keep her daughter grounded in a town where kids get everything they want. She befriends Danielle, a 45-year-old divorcee who is preparing for a rendezvous with a man she met on a dating site called WealthyMen.com. (It's for real. Google it.)

But the best character is Teresa, the wide-eyed, skinny wife of a construction mogul, whose taste for ugly opulence knows no bounds. She has ordered the construction of an absurdly large family mansion - of the real estate gambit, she declares, "I don't want to live in somebody else's house, that's gross" - and brings us along on a furniture shopping spree worthy of Michael Jackson. "I hear the economy's crashin', so that's why I pay cash!" she says, as she forks out $120,360 in hundred-dollar bills.

For the army of editors who makes this series work, Teresa is both a dream come true and an easy target. "I am so not a stage mom," she says, as the screen cuts to her, coaching her young daughter in hip-hop moves at a dance rehearsal. The cameras keep returning to her daughter looking miserable.

The series is filled with constant cutaways to rich children, sitting in bedrooms loaded with clothes or making declarations like, "If I had, like, a fat old mom, I would hate it." We can't really blame the kids, or hate them, for growing up with such distorted points of view. But we can blame the mothers, even more than we blame them for having, spending, and flaunting so much cash.

Perhaps that's the real secret to the "Housewives"' success, and why the series is more appealing now than ever. Loaded with punch lines and cartoonish music, it's a light-as-air way to channel economic frustration into moral superiority. It's class warfare without an ounce of guilt. And that feeling, especially now, can be priceless.

THE REAL HOUSEWIVES OF NEW JERSEY