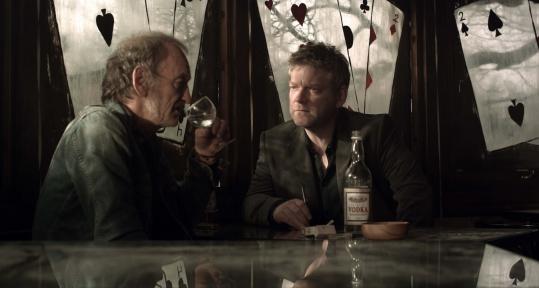 When a British star with lots of Shakespeare on his resume pops up as a depressed TV detective, complete with glassy eyes, gray skin, and stale booze breath, we are fully expected to genuflect. And when it comes to Kenneth Branagh, and his new semi-regular gig as Inspector Kurt Wallander on PBS, we are pleased to abide. Or at least I am, and I suspect you will be, too, if you're drawn to bleak whodunit series where it's always rainy, literally or figuratively.

"Wallander" is a three-episode run of "Masterpiece Mystery!," beginning Sunday at 9 on Channel 2, with more episodes planned for next year. Based on the crime novels by Swedish author Henning Mankell, the series is for Branagh what "Prime Suspect" was for Helen Mirren - a chance to exude some glamourless small-screen heroism. With rumpled clothes, stubble on his cheeks, and a belly, Branagh's Wallander ambles along the line between gentle sadness and workaholic exhaustion. Separated from his wife and living in seedy bachelor digs, he has given up his personal life to slosh wearily through the world's ills.

I can't say "Wallander" reaches the heights of "Prime Suspect," especially since the murders and their attendant mysteries aren't especially clever or engaging. In the three self-standing episodes that air this month, the deaths come fast and furiously, and with plenty of shock value - the series' first violent death, in particular, which occurs in a dazzlingly yellow rapeseed field, as well as the subsequent scalpings. Yes, scalpings. But the pieces don't tend to add up to much; the suspects and victims often slip out of custody too easily; and each episode's crimes dovetail with some predictability. These aren't brain teasers.

Still, the series has great hypnotic allure, as the murders and deaths drive Wallander further into himself. They're grim markers on his existential journey, especially when they involve young women, which they often do. Wallander has an unrealized relationship with his own daughter, Linda (Jeany Spark), who worries about her distant dad, and he self-loathingly broods about his failings as a parent. During one case, a teen girl wryly asks Wallander, "Were you a crap dad?" "Yeah, I was a crap dad," he answers with a sense of confessional relief.

The appealing aspect of Branagh's performance is that he holds on to his reserves of sorrow and fury, keeping them right below the surface. When he does have an occasional eruption, it's all the more powerful for having been held back. "These are our lives," he says with uncommon distress to a relative stranger. "And they're fragile and precarious and they're miraculous and they're all we have." It's a small, but potent, crescendo. By episode 3, after the unexpected death of a friend, Branagh begins to show Wallander's impatience and remorse more overtly, but even then he is generally muted and clamped down. He never strains to affect swagger or moral righteousness, to be the "quirky TV detective." Instead, he relies on his rundown, doughy physique and watchful eyes for impact.

The filming of "Wallander" is also exquisite. The series is in English, with British accents, but it's filmed in Sweden and the characters are meant to be Swedish. Perhaps the Anglicization detracts from Mankell's insights about the Nordic temperament, but mixing grim Britishness with a colorfully moody Scandinavian landscape helps to differentiate "Wallander" (directed by Philip Martin and Niall MacCormick) from so many other "Mystery!" series. It also externalizes Wallander's internal disaffection. The camerawork, too, is extraordinary, with shots framed through reflections on glass and lots of shifting focus. Like its hero, "Wallander" rewards close scrutiny.