From high society to isolation, with cats and filmmakers in tow 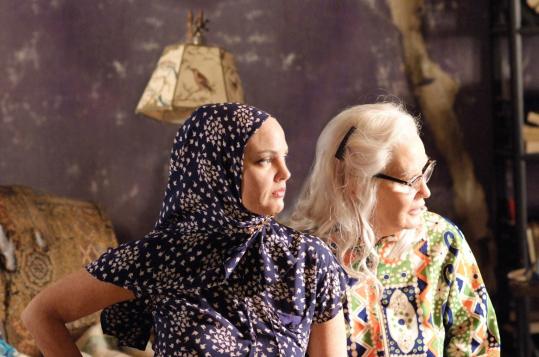 There's something strangely beguiling about people imprisoned by the past, caked with layers of psychic dust. Norma Desmond of "Sunset Blvd.," Miss Havisham of "Great Expectations," Baby Jane Hudson of "What Ever Happened to Baby Jane?" - they're the great figures of gothic decay, women entombed in hollow mansions clinging to yesterday's dreams. Their skin sags, their speech is passe, their dress is fashion-way-backward. And yet their delusions are sadly beautiful and heroic, particularly to the world's drag queens and lovers of camp tragedy.

"Big Edie" and "Little Edie" Bouvier Beale of HBO's "Grey Gardens" are in this pantheon, a psychologically entwined mother and daughter who spent decades steeped in old regrets in an East Hampton mansion that reeked of cat pee. Aunt and cousin to Jacqueline Onassis, the once wealthy Beales lived in quiet squalor and poverty until they were immortalized in a culty 1975 Maysles brothers documentary, also called "Grey Gardens."

HBO's scripted rendition, which premieres tomorrow at 8 p.m., re-creates the Beales' fall from early-20th-century high society to the seclusion of their garbage-filled, raccoon-infested Grey Gardens estate. It's a generally pleasing but flawed production.

Directed by Michael Sucsy, "Grey Gardens" nicely establishes the suffocating interdependence of Big Edie (Jessica Lange) and Little Edie (Drew Barrymore). Like HBO's "Bernard and Doris," the movie keeps an admirably tight focus on the two characters, isolating and examining each strand in the ties that bind them so inescapably. As the story toggles between Little Edie's 1930s youth and the early 1970s when the documentary was filmed, you can feel the Beales' fates spiraling down together, with Big Edie pulling her high-spirited daughter with her into isolation and depression. Ultimately, cornered in a section of their stagnant home, they're like two similar, defiant expressions on the same face.

Lange is flat-out extraordinary as she reveals the extent of Big Edie's big narcissism without demonizing her. As the young Big Edie, Lange evokes the broken personality of a woman in her prime who aspired to be a star but who became a bored wife and mother instead. When she sings with her piano man, Gould (Malcolm Gets), she's transported and transporting, in a stupor of audience love like Judy Garland. Big Edie hardly cares when her marriage to Phelan Beale (Ken Howard) disintegrates. Meanwhile, she urges Little Edie to have both love and a singing career, but her actions - manipulating Little Edie out of New York and back home - are more vindictive. Lange hams it up in "Grey Gardens," without plummeting into parody.

Little Edie is the trickier role, since she's both an angry extrovert and a victim, and her eccentricities increasingly take on the flavor of mental illness as she grows older. She dresses in upside-down skirts and, because her hair falls out from stress, she wears dramatic scarves on her head. Barrymore does her darnedest to be poignant, and I was impressed as she let herself go further than usual into her performance. And yet I never forgot I was watching Barrymore trying hard, especially in contrast to Lange's effortlessness. Her accent wanders, her older-woman prosthetic sits awkwardly on her face in the 1970s scenes, and she too-often projects fragility where she should be rebellious and raw.

Barrymore's best moment comes late in the movie, when Jeanne Tripplehorn shows up as a gentle, morose Jackie Onassis, to help out her poor relatives. Little Edie is consumed with jealousy, snapping "Is it true that Jack Kennedy gave you gonorrhea?" Her bitterness is monstrous. With more of that ferociousness, Barrymore might have pushed her portrayal to a higher level of complexity, and created more than just an oppressed, pathetic daughter.

The movie makes another misstep in the final section, as Sucsy and co-writer Patricia Rozema strain for something like a happy ending. In the 1970s, we see the Beales agree to be filmed in a last-ditch attempt at finding the spotlight, while the Maysles brothers are presented as handing them their dream. The film veers toward a sense of triumph, perhaps a token of our time when being filmed for reality TV is all-validating. But the story of Big Edie and Little Edie loses something when "Grey Gardens" becomes a tale of long-delayed gratification, instead of a portrait of long-held disappointment.