Series aims to show the Indian side of things 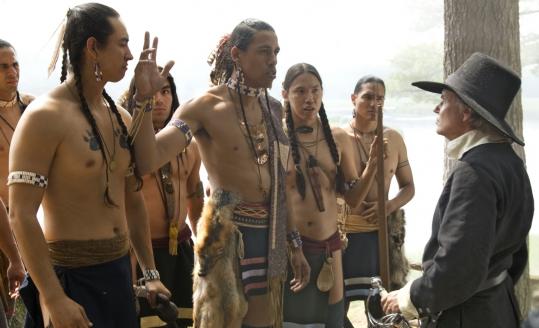 Among the many reenactments in the series is this meeting between Wampanoag tribesmen and a European settler. (webb chappelle)
By Mark Feeney Globe Staff / April 13, 2009
Text size – +

'We Shall Remain," a revisionist account of American Indian history, runs tonight and for the next four Mondays on Channel 2 as part of PBS's "American Experience" series.

A necessary and welcome corrective, "We Shall Remain" isn't meant to be comprehensive. Don't expect to find Pontiac, Chief Joseph, or Sitting Bull - let alone Indian casinos. Instead, individual episodes examine the fall of the 17th-century Wampanoags in Massachusetts; the Shawnee chief Tecumseh's dream of a pan-tribal union, in the early 1800s; the forced relocation of the Cherokee three decades later; the story of the warrior Geronimo; and the American Indian Movement's 71-day occupation of Wounded Knee on the Pine Ridge Reservation in 1973.

The series's signature image is a slightly hazy black-and-white photograph. It has the classic look of the pictures Edward S. Curtis and John K. Hillers (both white men) took of Indian life in the late 19th and early 20th centuries. In fact, Bob Charlo, a Kalispel Indian, took it in 1992.

It's the Indian side of things "We Shall Remain" aims to show. Other than the occasional academic, most of the talking heads are Indians. Thomas Jefferson and Andrew Jackson are portrayed, not inaccurately, as villains. Tecumseh and Geronimo are seen in heroic terms.

Charlo's photograph shows a teepee on an otherwise empty field in Washington state. An American flag waves from one of the sapling poles. It's an arresting metaphor for the superimposition of the United States on Indian history.

There's more to it, though. The angle of the flag and the elevation of the pole echo the image of the flag-raising on Iwo Jima. Among those who raised that flag was an Indian, Ira Hayes. What better symbol for the integration of Indians than the presence of one in so iconic an American scene? Except that after the war, Hayes suffered from alcoholism and was dead less than 10 years later: the hero as outcast. That's far more representative of the truth "We Shall Remain" has to offer than any projected symbolism is.

There's hardly any mention of integration in "We Shall Remain," nor should there be. There's nothing about segregation, either. The truth is so much ghastlier even than that. Banishment and extermination were the order of the day for centuries. Certain terms recur in "We Shall Remain" - "ethnic cleansing," "resistance movement," "under siege" - terms not commonly heard in high school history classrooms. "We Shall Remain" makes the pertinence of those terms all too plain.

The most impressive thing about the series is how unflinchingly it acknowledges the gruesome moral underpinnings of manifest destiny. "Manifest destiny" manages to sound both noble and bland in English. In any Indian language, it might most accurately be translated as "What's yours is rightly ours, so hand it over."

Manifest destiny, a 19th-century coinage, applies no less to the early European settlers - as tonight's episode, "After the Mayflower," reminds us - than it does to the westward expansion of the United States.

The nature of its subject presents the makers of "We Shall Remain" with two great handicaps. The first is the unrelenting grimness of the story. The sour-mournful tone of Benjamin Bratt, who narrates the series, is fitting. The people you're rooting for are all doomed. To be sure, there's some variation on the basic themes of betrayal, slaughter, and defeat. In episode five, for example, "Wounded Knee," there's minimal bloodshed. Things do not end well, though.

The second disadvantage is structural, not emotional. Other than the occasional map or painting, the filmmakers have almost no period visual material to use for much of the series. Not until episode four, "Geronimo," are there many photographs; and portraits of his squared-off, implacable face are put to excellent use. With "Wounded Knee," there's news footage as well as current-day interviews. It's not an accident that these are the two most successful episodes.

The filmmakers deal with this problem in three ways: talking heads (nearly all of whom are very good), picturesque scene-setting (mostly gliding panoramas of pristine landscapes), and reenactments. Viewers seem to have long ago made peace with reenactments, even if they do bear the same relation to history and fact as "American Idol" does to music and adjudication.

Even so, the ones here are notably vexing, for two reasons. One is sheer overload. Feeling the need to fill so much screen time with reenactments, the filmmakers pull out all the stops. We get tight close-ups, handheld camerawork, aerial shots (lots and lots of aerial shots), slo-mo, Steadicam, all very prettily lit.

A buff King Philip, in tonight's episode, frisks on the beach with some children. Next week, when Tecumseh has something complicated to say, he does so in English. When it's easy for a viewer to figure out, it's in Shawnee. This is almost as convenient as William Henry Harrison's habit, in the same episode, of speaking aloud the words he's writing when he composes letters.

The other difficulty is that there has been nearly a century of widely disseminated Indian reenactments; they're known as westerns. Admittedly, they are historically inaccurate (not to mention almost always wildly biased against Indians). But the point is that an unavoidable association exists for most viewers between seeing dramatized renderings of Indians on screen with Hollywood.

Just how inadequate the reenactments can be is brought home in episode three, "Trail of Tears." A brief sequence looks at Sequoyah, the Cherokee who developed an alphabet for his tribe. No actors are involved. Instead, we see a painting of Sequoyah and some pages from books with his alphabet. It's that simple. Visually, no less than historically, it's so much more effective and expressive than the rest of the episode.

AMERICAN EXPERIENCE: WE SHALL REMAIN