The 'Thrilla' through Frazier's eyes 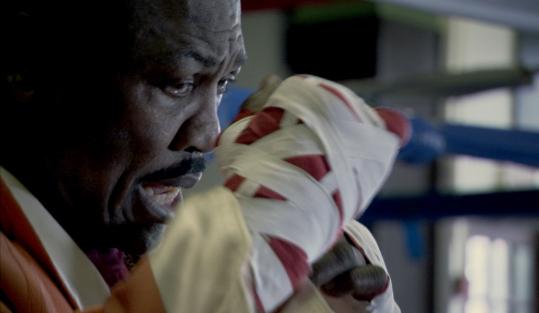 Any sportswriter will tell you: For a good story, go to the winner's locker room - and for a better story, go to the loser's. "Thrilla in Manila," which airs tonight on HBO at 8, is a case in point.

As Ali once said of Frazier, "He's just an ordinary individual. He don't represent nothin'. . . . He's just a victim of circumstances." The absence of the very qualities that made Ali such a potent and captivating cultural symbol made Frazier seem, by comparison, almost negligible outside the ring.

Inside was a different matter. Epic in scale and intensity, the three Ali-Frazier fights have a special place in sports history. Frazier won "The Fight of the Century," in New York, in 1971, in a 15-round decision. Ali took a 12-round decision, also in New York, in 1974. And then in 1975 there was the "Thrilla in Manila," which Ali won in a 14-round technical knockout.

"Won" is a deceptive word. Even as Frazier's trainer was having the fight stopped because his boxer couldn't see (imagine being in the ring with Muhammad Ali and not knowing where his next punch was coming from), Ali was telling his trainer to cut off his gloves: He couldn't face another round.

The most notable thing about tonight's 90-minute documentary is that it looks at the rivalry from Frazier's perspective. Normally, it's Ali's side we see things from. His long struggle with Parkinson's disease has made sympathy for him all the greater over time.

So even though the events in question are more than three decades old, they seem almost new, thanks to seeing them from Frazier's viewpoint. He remains bitter - and with reason. Ali's history of taunting opponents turned truly ugly with Frazier. He called him "ignorant," "an Uncle Tom," "a gorilla." Ali played both sides of the race card: Frazier was at once inauthentically black ("He works for the enemy," Ali declared) and the classic racist caricature of blacks as subhuman. The fact that Frazier had spoken up for Ali when the latter was stripped of his title because of his refusal on religious grounds to be inducted into the Army (Frazier had even given Ali money) made the use of such invective even more shameful.

"Thrilla in Manila" lacks the verve and sense of a cultural moment captured in Leon Gast's 1996 Academy Award-winning documentary, "When We Were Kings," about the 1974 Ali-George Foreman title fight. It's also a bit slick and hyped up. The unavoidable fact we can't hear from Ali other than in period footage is also a drawback. And it's disorienting that most of the fight announcers are British. (The film is a co-production with England's Channel 4.)

That said, "Thrilla" makes for compelling viewing. We spend time with Frazier, now 65, at the gym he owns in North Philadelphia. Friends and associates sing his praises. (Marvis Frazier, who followed his father into the boxing ring, does a quite creditable Howard Cosell imitation.) Ferdie Pacheco, Ali's onetime doctor, serves as a sardonic Greek chorus - and why Martin Scorsese has yet to cast him in a movie is anyone's guess. Even Imelda Marcos shows up. She mentions, among other things, her inability to watch as she sat ringside. The sounds coming from the bout were that brutal.

That brutality triggers a change in the film. The first hour is interesting enough. But the final 30 minutes are phenomenally powerful - not just because most of it consists of footage from the fight, but also because we get to see Frazier watching film of the bout for the first time. Almost as impressive as his performance in the ring is the utter equanimity with which he views the barely imaginable punishment he endured. It's no wonder Ali never spoke ill of Frazier again. "That's one hell of a man," he said. "God bless him."

Scheduled to follow tonight's broadcast of "Thrilla in Manila" are a junior welterweight fight between Manny Pacquiao and Ricky Hatton, and a middleweight bout between Winky Wright and Paul Williams. What a good idea, some junior-assistant programmer must have thought, a documentary about a prizefight as a lead-in to a couple of more prizefights. Sure, and after Agincourt onlookers said, "Hey, everybody, let's go watch a couple of archery tournaments!"

THRILLA IN MANILA On: HBO