Amy Poehler stretches out, leaving the sketch TV of 'SNL' for a larger role in a new comedy from 'The Office' team 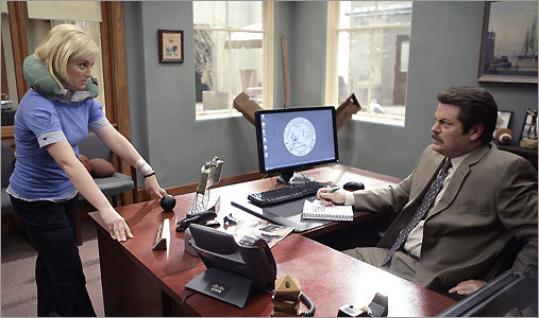 "This could be my Hoover Dam," says Leslie Knope, as a glorious future - maybe even the US presidency! - twinkles in her eye. A mid-level boss at the Parks Department in Pawnee, Ind., Knope hopes to turn a dirt pit into a neighborhood green space. "It's a great time to be a woman in politics," she enthuses to the camera. "Hillary Clinton. Sarah Palin. Me. Nancy Pelosi."

Right away, you can tell that NBC's new sitcom "Parks and Recreation" is from the makers of "The Office," Greg Daniels and Michael Schur. The series is filmed in their trademark mockumentary style, and with the same kind of askew humor that even makes the name Knope seem funny. And Amy Poehler's Leslie is a clear spiritual cousin to Michael Scott, Steve Carell's "Office" boss. They own matching delusions of grandeur. If Leslie ever jumped from trees to paper, she'd fit right in at Dunder Mifflin.

But I'm far from ready to dismiss "Parks and Recreation," which premieres at 8:30 p.m. on Channel 7, as a clone of "The Office." The show is in the manner of "The Office," in the way David E. Kelley series such as "Ally McBeal" and "Boston Legal" have shared their creator's mode and vision. Both comedies similarly leave awkward spaces where most sitcoms stuff punch lines, and both mine the workings of small-time bureaucracy for absurdist zingers and pathos. They invite us to cringe lovingly - not excruciatingly, as in Ricky Gervais's original "Office" - at the rampant cluelessness.

But "Parks and Recreation" has many distinctions, not least of all the hugely talented Poehler from "Saturday Night Live," who promises to develop Leslie slowly, without the haste required in sketch comedy. And the show has the potential to become a flip, witty political allegory. "The Office" is an off-center take on political leadership, with Michael and Dwight as a twisted kind of Bush-Cheney axis. But "Parks and Recreation," set in the mire of a municipal office, has a more directly governmental premise. While Leslie loves to interact with the citizens of Pawnee, her boss, Ron (Nick Offerman), passionately believes in privatization and has no intention of helping Leslie help the community. "I think that all government is a waste of the taxpayer's money," he tells us. They're opposite poles of a spinning wheel.

With Ron's resistance, Leslie's park project is bound to be an exercise in ineffectuality. "Parks and Recreation" will unfold as a muted farce pitched between a Dickensian portrait of a do-nothing bureaucracy and "Waiting for Godot." Fittingly, Daniels and Schur have given the abandoned construction site that Leslie wants to rehab the label "Lot 48," a nod to the postmodern vacuum of Thomas Pynchon's novel "The Crying of Lot 49." Yes, selling paper in an era of digital information gives "The Office" an existential drift; but "Parks and Recreation" may go even harder at comic futility.

The supporting cast of "Parks and Recreation" is also distinct. On "The Office," the employees are a collection of misfits - it's workplace as day-care center. On "Parks," Leslie is surrounded by a slightly less wacky crew. Paul Schneider (he starred in the indie drama "All the Real Girls") plays Mark Brendanawicz, a city planner who realizes he can use Leslie's ambition and admiration for his own ends. Aziz Ansari is Leslie's woman-crazy colleague; he sneers at Leslie, but he has none of the sympathetic charm of John Krasinski's Jim on "The Office." Aubrey Plaza is a profoundly uninspired intern named April, and Rashida Jones (from "The Office") is a local nurse helping Leslie with Lot 48.

Recently, word surfaced that in preview screenings, focus groups were disappointed with "Parks and Recreation." My first reaction: There's something potentially comic about the mechanics of focus groups and the inexact science and pointlessness of product juries. It could be like "12 Angry Men" meets "The Office." Perhaps Daniels and Schur have been handed their next scenario, once "Parks and Recreation" gains momentum.