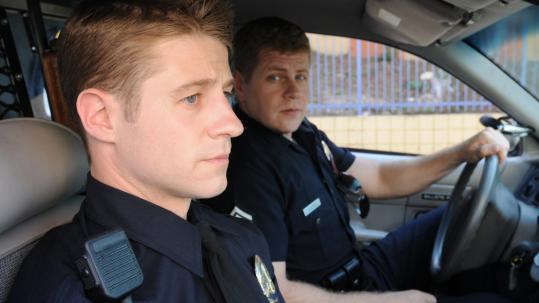 One thing the "American Idol" judges tend to harp on when they offer their opinions to contestants: Know who you are. To get ahead, know your strengths and know your limitations, and respect them. Audiences like a firm sense of identity.

NBC's new drama "Southland," tonight at 10 on Channel 7, knows exactly what it is from the get-go, and that is appealing. "Southland" is a pre-"CSI"-styled police procedural, modeled after "NYPD Blue" but set in LA - nothing more, nothing less. You've got your nasty perps-of-the-week and your regular cops with messy personal lives. You've got your street-verite filming style and your brusque officer who calls patrol work "driving through the sewer in a glass-bottom boat." The show is what it is - no surprises, no disappointments.

From "ER" producer John Wells and scheduled in the old "ER" time slot, "Southland" begins with the story of a rookie cop, of course. Ensemble police dramas that traffic in pointless urban violence are required to begin through the innocent eyes of a green newcomer, in this case Ben Sherman (Benjamin McKenzie from "The O.C."). Ben is from a wealthy background, which makes his big-shot training officer John Cooper (Michael Cudlitz) taunt him and call him "Tori Spelling." Cooper leads Sherman through a day from hell, ranging from the inane (a meth addict who wants a cat rescued from a roof) to the profound (the murder of a child). You can bet that Sherman is in for at least one rude awakening before he gets to sleep. "Southland" handles the rookie plot - a TV-pilot staple - with energy, if not originality.

McKenzie was a bit of a stiff as Ryan on "The O.C.," and, with his pasty face and wide eyes, he is nearly a zombie here. But he fits the role and makes you want to learn more about his character, as does the more swaggering Cudlitz. Within his character's bluster, Cudlitz intimates, there is a needy soul. Regina King also shines as detective Lydia Adams, who takes care of her elderly mother. The script doesn't give us much information about Lydia, but King projects a lot of enticingly mysterious subtext.

Two of my favorite lesser known actors add potential to the solid cast, both of them capable of any explosions and emotional ellipses the writers might give to them in forthcoming episodes. Tom Everett Scott from "That Thing You Do," "ER" (he was Abby's brother), and a few quickly canceled series including TNT's "Saved," plays a womanizing detective who goes so far as to hit on the mother of a missing child. He isn't prominent in the premiere, but he is an ace in the show's pocket. And Shawn Hatosy, from the movie "Outside Providence," brings some intrigue and angst to his savvy detective whose marriage appears to be falling apart.

"Southland" makes full use of the streets of LA and the attendant sounds of sirens and horns. The city almost figures as a supporting character, as the hand-held cameras follow the cops along the sidewalks. A number of times during the premiere, I thought of the movie "Crash," which similarly gets all up in LA.

Actually, there is a small surprise at the end of "Southland" tonight, regarding one member of the ensemble (which also includes Arija Bareikis as a patrol officer and Kevin Alejandro as a gang detective). You won't see the development coming, and I won't spoil it here. But it promises at least a few unfamiliar moments to come in what is an otherwise tried-and-true approach to drama.