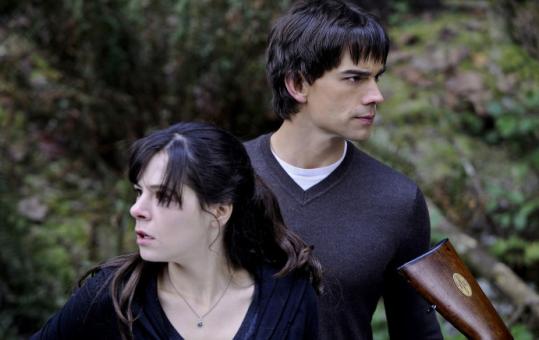 CBS's "Harper's Island" is a limited-run series, which means it arrives tonight with a 100-percent definite end date of July 2. So you can relax. After July 2, you won't need to worry about stumbling across this enervating, vapid, and obscenely over-promoted thriller when you're channel surfing. After 13 episodes, it will never be able to stalk you again.

"Harper's Island," which premieres tonight at 10 on Channel 4, is the merging of an Agatha Christie-style murder mystery and a horror flick. Alas, it's not nearly as clever as the former or as scary as the latter. Each week, one or two of the ensemble of 25 characters will be gruesomely murdered by a vicious and impressively efficient killer, until we finally learn his or her identity, assuming we still care, which is unlikely.

The series begins with a gleeful wedding party ferrying en masse to Harper's Island in the Pacific Northwest. Henry (Christopher Gorham) is going to marry the wealthy Trish (Katie Cassidy), and most of their friends - single or not - are hoping to hook up with someone new. Little do they know that there is a dead body - OMG! - tied to the bottom of the boat. Once they arrive at the island, a few locals get mixed in with the party, and they all proceed to do suspicious things to confuse us and to make us - boo! - jump.

Seven years earlier, we learn, there was a spate of murders on the island, and one of the victims was the mother of Henry's childhood friend, Abby. That killer is supposedly dead, but events may suggest otherwise. Also, jealous ex-lovers and a disgusted father-in-law-to-be lurk in the shadows, to cast even more doubt.

Oddly, the large ensemble is almost willfully uninteresting, except for the dependably sympathetic Gorham ("Ugly Betty") and Elaine Cassidy, who plays Abby. There are the blond women, and there are the brunette women, and then there are a bunch of guys, notably the chubby dude who shows up and exclaims, "In what universe do I not bring the cooler!" It's like meeting the members of a poorly cast dating-reality show, where everyone on screen seems to have come from one of two or three molds. Let's just say that, as these characters die, you probably won't be feeling much grief.

To prevent piracy, CBS imprinted each TV critic's name on his or her DVDs of "Harper's Island." Seeing my name on screen throughout this lame series was the only thing that succeeded in sending shivers up my spine.