Judging Paula: Has she gotten smarter? 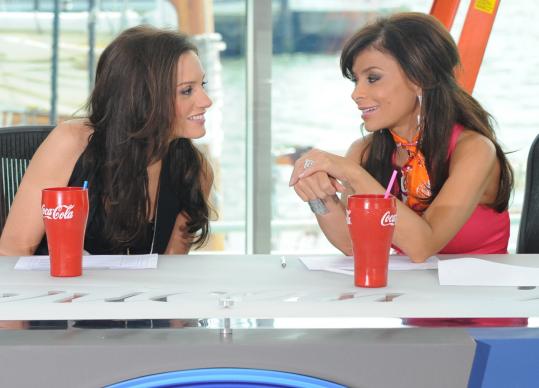 When "American Idol" producers announced that they were adding a fourth judge to their panel, the reasoning seemed clear: In seven seasons of critiquing would-be pop stars, the existing trio was getting predictable. Randy Jackson was the guy who began and ended every sentence with "dude." Simon Cowell gave brutally honest A&R advice and overused the term "cabaret." Paula Abdul spoke of rainbows and hearts and occasionally dropped her head onto the table.

So there were high hopes for Kara DioGuardi, with her songwriting talents, her music industry experience, her gruff sensibility. Yet so far, she's accomplished only one thing: making Paula look smarter.

Yes, I said it, and I mean it. Now, keep in mind, we're not talking Mensa smart here. We're talking Paula smart. She still gushes about pierced hearts and inner beauty, and she still has the syntax of Sarah Palin on a caffeine high. But somewhere hidden in all of those words, she usually has a point. And more often than not, her observations are sharper, more vivid, and more useful than anything Kara has to say.

Kara: "So I think tonight we got a glimpse of what we saw in the beginning, which is this singer who can just let it out and wow us. And I think we need to see more of that. But Lil, you back in the Rounds."

Or about energetic crooner Adam Lambert:

Paula: "There are artists who have longevity in this business because of their unique and riveting performances. I'll name a few. Mick Jagger, Steven Tyler, and Adam Lambert."

Advantage Paula, who, over and over again this season, has managed to emit little nuggets of wisdom. While the numerically challenged Kara tends to ramble and repeat stock phrases - "Who are you as an artist?" "What we're looking for is artistry. . ." - Paula finds an apt analogy or suggests a useful bit of stagecraft. She told since-departed Megan Joy Corkrey, who danced like one of those plastic Hawaiian hula dolls, that she should sit on a stool beneath a spotlight. She told blind pianist Scott MacIntyre that he was boring us by sitting behind a piano every week. And while Simon poked fun at her in both cases, Paula happened to be right.

She has even tried to sound knowledgeable about music, using terms like "cadence" and "legato," if not-quite-correctly, and referring at times to missed A notes. Whether she has perfect pitch is an open question. But at least she's trying, approaching her job with a seriousness of purpose that we haven't seen in years.

The reason for the shift? The best guess is competition. For a time, during the audition rounds, it seemed that Paula and Kara were forming a sort of boys-vs.-girls pact, a power grab against the longtime primacy of Simon. But at some point the alliance soured. Negative things were said on talk shows. Now, Paula flirts with Simon more furiously than ever (he swings between affection and dismissiveness in a way that's uncomfortable to watch, and she comes across at times as Alice Kramden with heavy lip gloss). But she also seems determined to show Kara who the alpha-female is.

That even means employing an uncharacteristic brand of harshness. She seems more willing than ever to critique a poor performance, though it clearly pains her to do it; "I'm sorry, Michael. I love you very much," she told contestant Michael Sarver two weeks ago, after saying his oily take on Motown "felt a little old-Las-Vegas-loungey to me." She wants to speak the truth, but she still wants to be the nice one.

A meaner Paula Abdul, to be sure, is not quite what "Idol" needs. For contestants, "Idol" is a cruel endeavor disguised as an ego-boost - a microcosm of the music industry - and Paula, who works admirably hard to find something positive to say, makes everything feel a little less mean. She also reminds viewers how tough it must be to sing live before nearly 30 million armchair critics.

If she can do all that and be cogent, too, then perhaps Kara has accomplished something after all. Especially since Paula has lost none of her entertainment value in the process. She's not cogent cogent. She's Paula cogent. As "Idol" goes, that's more than enough.

Joanna Weiss can be reached at weiss@globe.com. For more on TV, go to www.boston.com/tvblog