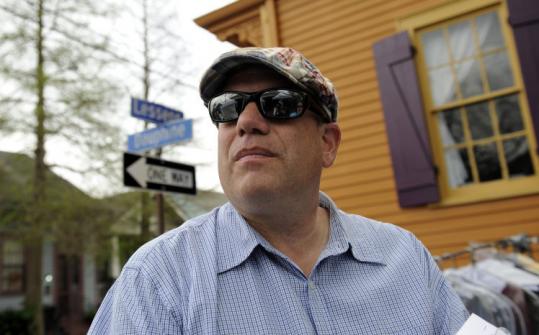 NEW ORLEANS - David Simon, creator of the critically acclaimed television shows "The Wire" and "Homicide: Life on the Street" is in New Orleans working on his next project.

Named after the Creole neighborhood known for its rich musical history, "Treme" (truh-MAY) is a prospective TV series geared for HBO that aims to capture New Orleans' heritage and traditions as residents struggle to recover from Hurricane Katrina.

However, Simon is quick to say it's not just another Katrina project.

"This is an American story," he said in an interview from outside a jazz club where the hourlong pilot was being filmed this week. "This is about an American city trying to pick itself up and doing it without a great deal of help."

To tell the story, Simon abandons almost all the backdrops New Orleans is best known for - the French Quarter and Garden District included - and gets into grittier, lesser-known neighborhoods he says have been "under-chronicled."

"We had to get inside New Orleans traditions," he said. "You can't do that from the French Quarter."

He said it was important to capture the city's dysfunction as well as its grace.

"New Orleans is not the most efficient, best-run metropolis in America. It never has been," he said. "But it's a city with an ornate and essential culture and musical tradition that is maybe one of the most original things America ever invented."

"It's a metaphor for where we are in America right now," he said, standing outside Vaughan's Lounge, a music club near one of the city's hardest-hit neighborhoods, the Lower 9th Ward.

Simon said he had been wanting to tell a story in New Orleans for more than a decade before Katrina, which hit in August 2005, but "couldn't find a hook."

Much of his "Treme" writing team is from New Orleans. It includes resident Tom Piazza, author of the nonfiction "Why New Orleans Matters," and Lolis Eric Elie, a reporter for The Times-Picayune newspaper. Eric Overmyer, who lives in New Orleans and whose TV credits include "St. Elsewhere" and "The Wire," is a friend of Simon's and a co-executive-producer on "Treme."

Simon and company have been in New Orleans for several weeks filming. The hope is "Treme" will be picked up by HBO, which has asked to see the pilot and a handful of scripts to judge before going on with a full first season.

If picked up, it will be the second time in three years a major television network has put New Orleans and Katrina in the spotlight. Fox's post-Katrina detective drama "K-Ville" aired during the 2007-08 season but was canceled due to low ratings and the disruption of last year's writers strike.