Let's do the time warp again

From the '60s to today, era jumping is a TV constant 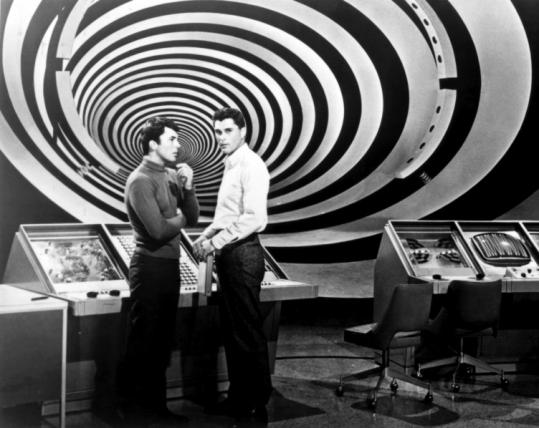 So far, the biggest theme on ABC's "Lost" is time travel. Certainly "Lost" is one of the most original and elaborately plotted shows ever on TV, but it is far from the first series to give us characters "unstuck in time," as Kurt Vonnegut put it in "Slaughterhouse-Five." From "Star Trek" and "One Life to Live" to "Quantum Leap" and "The X-Files," TV writers have played with time travel and invented their own rules regarding chronology and the relationship between the past, the present, and the future.

Sometimes, time travel on TV symbolizes an interior journey of personal transformation, as it did in "A Christmas Carol." The hero has to go backward, in order to go forward. But often TV writers fling characters through time like skipping rocks to broaden the canvas for their sci-fi adventure stories. In the process, they can explore what has changed - for the better and for the worse - across the years, decades, and centuries. The writers can use their shows to ask theoretical questions about what might have been, and they can conjecture what the future may hold. They can challenge the idea of fate.

Are there elements of the "Lost" time-space shakeup that other shows have already toyed with? And will the "Lost" writers ultimately create a time-travel mythology that is markedly different from everything that came before it? Here's a countdown of some of TV's notable ventures in time travel.

This short-lived 2007 sci-fi series never quite lived up to its promise, as it positioned a man between what was supposed to happen and what did happen. But the drama might have evolved into a rich psychological-supernatural story with more time to grow. Kevin McKidd, from "Rome" and "Grey's Anatomy," played a San Francisco reporter being involuntarily shuttled back and forth in time, from his wife and son in the present to his earlier life with a fiancee who was supposedly killed in a plane crash. He and his ex-fiancee were meeting in a time-travel netherworld, helping to change strangers' destinies and re-creating their own.

"The X-Files" had a number of time-travel moments, including a 1998 episode called "Triangle" that landed Mulder - and a few other familiar "X-Files" faces - in 1939. Lost in the Bermuda Triangle, Mulder was on a passenger boat being invaded by Nazis. The artful episode, written and directed by Chris Carter, features long, real-time takes and a split-screen effect across which past Scully and present Scully cross paths. As with "Lost," there are "Wizard of Oz" allusions, including a ship's band called Elmira Gulch and the Lollipop Guild. The episode ends with Mulder telling Scully, "I love you." Her response: "Oh brother."

This not-so-precious gem ran for one season, from 1966-67. From Sherwood Schwartz, the "Gilligan's Island" guy, "It's About Time" sent a pair of astronauts through the time barrier in a tin-can capsule, all the way back to prehistoric times. Here's why the sitcom is on this list: The caveman Gronk was played by - "ooh, ooh" - Joe E. Ross from "Car 54, Where Are You?" Gronk's wife, Shag (later changed to Shad when the show figured out the double meaning), was played by the insanely kooky Imogene Coca. And the writers switched up the entire series mid-season, and sent the cave people to the 1960s with the astronauts. Talk about your "Lost"-style game changers.

On this mid-1960s series, the Robinsons were lost in space and, on occasion, in time. They even met up with a "Time Merchant" in control of time for all of the universe, and he sent Dr. Smith back to the launch of the Jupiter 2. But in the episode "Visit to a Hostile Planet," the Robinsons got into a time warp that left them on Earth in 1947. And don't think small-town Americans in 1947 took the landing of a spacecraft sitting down. Check out the episode at Hulu.com and take special note of June Lockhart's Marge Simpson hairdo and the possibility that the robot was the inspiration for Sheldon on "The Big Bang Theory."

"One Life to Live"

TIME TRAVEL ON THE CHEAP

In 1988, the daytime soap opera sent Clint Buchanan back to 1888, after he was thrown from a horse and hit his head on a rock. Since most of the "Lost" time travel so far has been on the island, era-based set design has been at a minimum. But on "One Life to Life," kitsch reigned. Buchanan City in 1888 looked like it was built in a day, and Miss Ginny the schoolmarm looked like Clint's beloved Viki. And seriously, I can't imagine how the actors made it without giggling through their dialogue, all of which had that Old West flavor, as in "You are the most exasperatin' filly I've ever laid eyes on." Clint mixes with his long-dead ancestors, before returning to the present for an emotion-packed reunion with Viki.

This mid-1960s one-season wonder was all over the place, time-wise, as two scientists hurtled through the ages via a broken time machine called "the time tunnel." The guys, Tony (James Darren) and Doug (Robert Colbert), always seemed to land in a time period on the eve of a historic event - you know, the Titanic, Pearl Harbor, Custer's Last Stand. Meanwhile, in a secret underground control room, a crew watches their adventures and tries to help them. Every episode began with a "Twilight Zone"-influenced narration that ended, "Tony Newman and Doug Phillips now tumble helplessly toward a new fantastic adventure, somewhere along the infinite corridors of time."

This 1960s cartoon series, which ran as part of "King Leonardo and His Short Subjects," has been referenced in "Lost," as well as in "The Matrix" and "Mystery Science Theater 3000." Tooter is a talking turtle with a straw hat who always wants to travel to another time and place, and then always desperately wants to come back home. He yells "Help me, Mr. Wizard" from the middle of a crisis set in the past, and Wizard the Lizard chants the magical incantation - "Drizzle, drazzle, drozzle, drome, time for this one to come home" - that brings the little guy back to the present. The moral of the story is the moral of many time-travel stories: There's no place like home.

HE CAN CHANGE THE WORLD

This series, which ran from 1989 to 1993, featured Scott Bakula as a character with the literary name of Dr. Samuel Beckett. The good doc gets stuck in a time-travel experiment gone awry, and he lands in other times in other people's bodies (even though he still looks like Bakula to us). He becomes a fixer through the ages, righting wrongs in strangers' lives and mixing it up with famous and not-so-famous historical faces from Buddy Holly to Dr. Ruth Westheimer.

HE CAN SAVE THE WORLD

"Heroes" has included a number of time leaps, including sending Hiro Nakamura back to the 17th century. But the 2006 episode "Collision" was one of the most dramatic moments in the first, and best, season of the series. It was the episode in which Peter Petrelli is riding the subway, and time stops for everyone but him. And then a very Americanized Hiro approaches him and says, "My name is Hiro Nakamura. I am from the future. I have a message for you." Since then, the series has lost its power to surprise; but this episode made our jaws drop.

This late-1960s gothic, supernatural soap opera spanned the centuries during its run, as the story line reached back to Barnabas Collins's pre-vampire days and jumped ahead to the 1990s, when Collinwood had been destroyed and the Collins family members were either dead or insane. The writers even played with alternate reality with plotlines set in "parallel time." The end result: An epic piece of camp melodrama that emphasized character angst and the eternal nature of love over the rules of time travel.

"Life on Mars" - both the compelling original 2006 British series and the recently canceled American remake - follows a detective named Sam Tyler who was hit by a car and sent back to 1973. Freaked out, he nonetheless gets involved in police crime-solving, but his methods are more civilized than those of his colleagues. This premise enabled the show to hold two eras side by side for our comparison, as well as dramatize the psychological strain of a man who is being forced into the present while he is drawn to a romanticized past.

If you change the past, do you change the future? The award-winning 1967 "Star Trek" episode called "The City on the Edge of Forever" answered that time-travel question with an emphatic yes. The Enterprise crew finds a portal through space and time, and McCoy jumps through it to 1930s America. Oops - McCoy alters the past enough to erase the existence of the Enterprise. And so Kirk and Spock go back in time, to stop McCoy from altering history, and there they meet Joan Collins's Edith. Kirk falls for her, but, well, he can't change history, and therefore he can't save her life. And if he did save her life, her pacifism would have enabled the Nazis to develop a nuclear bomb. Yeah, Edith had to die.

I think maybe everything that would ever be done on TV was done first on the great, the amazing "Twilight Zone." But I digress. Rod Serling's anthology series repeatedly touched on time travel - in "Once Upon a Time" (a janitor from the 1890s is transported to the future), in "No Time Like the Past" (a man with a time machine tries to alter history), and in "Back There" (a guy tries to go back and stop the Lincoln assassination). But my favorite is 1961's "The Odyssey of Flight 33," which is set on a passenger plane that crosses the time barrier and gets thrown back to prehistoric times. In their attempt to fly back to the 1960s, the pilots accidentally make it to 1939 - and they are running out of fuel. The episode ends on a very modern, dissonant, unsure, "Lost"-like note.

This series is turning out to be the supernatural drama about time, as the characters slip among the years, decades, and maybe even centuries. And the "Lost" writers have shown extraordinary storytelling skills along the way, making viewers feel the same confusion as the characters while giving us enough clues and answers to keep us hooked. Will "Lost," now in its fifth season, deliver a satisfying denouement at the end of its sixth and final season? I wish I could jump ahead to find out. Matthew Gilbert can be reached at gilbert@globe.com. For more on TV, visit www.boston.com/ae/tv/blog.