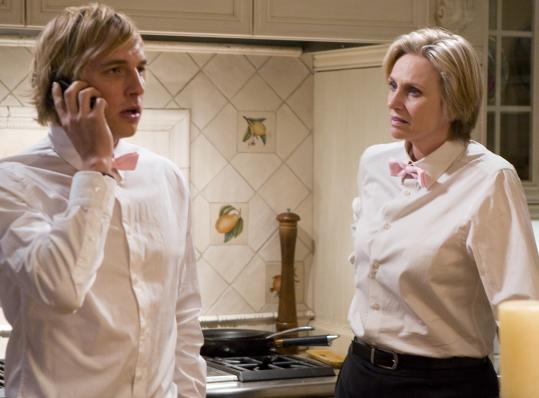 Above: Ryan Hansen and Jane Lynch play misfit staffers for a Los Angeles catering service in ''Party Down.'' Below: Janeane Garofalo (left) plays herself as a patient of a narcissistic therapist (Alexandra Wentworth) in ''Head Case.'' (ron batzdorff/starz (above); hamilton photography/starz)
By Matthew Gilbert Globe Staff / March 20, 2009
Text size – +

Given the many gruesome stories we hear about behind-the-scenes stress and misbehavior on movie and TV sets, it's easy to forget that acting can be fun. That's why it's nice to stumble across kooky, low-budget comedies such as the returning "Head Case" and the new "Party Down," both on Starz tonight. They're like TV-size versions of the Christopher Guest movies "Waiting for Guffman" and "A Mighty Wind," where the actors are clearly feeling loose and playful. The vibe is kiddie sandbox, not prison work yard.

"Head Case," at 10, and "Party Down," at 10:30, are both hit-or-miss affairs, like the Guest movies. Every successful joke leaves a few failed efforts in its wake, as each episode's vague story line ambles forward. But the improvisational atmosphere of these shows is infectious, especially if you have a taste for comedy that flirts with bad taste and political incorrectness. And most of the characters are refreshingly offbeat - just a little too out there and unpolished for the network milieu.

"Party Down," from Rob Thomas of "Veronica Mars," is set at an LA catering service that's staffed by wannabe actors and writers. Each week, the crew works a different event and farce ensues. Ken Marino plays the officious manager, and Adam Scott is the weary dude who has returned to catering after failing at acting.

Also in the strong ensemble: Martin Starr, who was unforgettable as Bill Haverchuck on "Freaks and Geeks," Lizzy Caplan from "True Blood," and the always excellent Jane Lynch, who appeared in the similarly unpolished comedy "Lovespring International" on Lifetime. All of the characters are misfits, and the pleasure of "Party Down" is watching the actors riff off one another as they go to extremes.

The events the crew caters range from a block party and an elderly dating mixer to a young-conservative gathering, and the party guests of the week are generally pretty crazy in their own right. Tonight, former "Veronica Mars" star Enrico Colantoni appears as a suburban husband on the verge of a nervous breakdown, and in a later episode, Ed Begley Jr. plays a pill-obsessed nut. When Begley's aging womanizer hits on Lynch's disgusted waitress, she delivers the best line of the episode: "No personal business on company pond."

"Head Case" similarly bounces between nutty regulars and nutty guest stars. Alexandra Wentworth plays Dr. Elizabeth Goode, a narcissistic therapist who sees - but hardly listens to - a roster of famous clients. In tonight's Season 3 opener, her clients include Janeane Garofalo and Macy Gray, who play themselves. The stars openly express their troubled feelings and neuroses to Dr. Goode - Gray talks about her obsession with sleeping with Barack Obama, and the angry Garofalo talks about her obsessive hatred of the Internet. But Dr. Goode is obsessed with her own forthcoming nuptials and continually brings the session around to marriage. She's a beacon of self-absorption in a town known for self-regard.

Together, "Head Case" and "Party Down" form a wry top-to-bottom glimpse of Hollywood, from the unhappy stars to the unhappy aspiring stars. They're easygoing comedies about easy targets.