'Battlestar' journey coming to a close 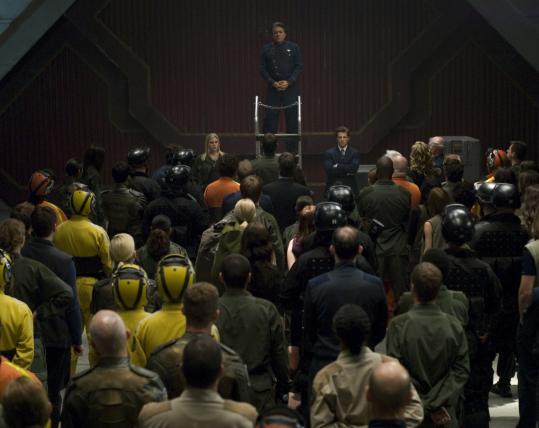 It's almost a shame that a show like "Battlestar Galactica" appears on a channel called SciFi - or "SyFy," the new identity that the network will take on this summer. Yes, the cable network deserves serious credit for producing this dark, imaginative, gorgeously cinematic version of the 1970s series. But the mere idea of science fiction probably turned off a good chunk of potential viewers, not to mention Emmy voters. So one of the best TV shows of the decade - which ends its run with a two-hour episode tonight at 9 - has never gotten quite the attention it deserved.

That's particularly true given the times; the best science fiction functions as allegory, and "Battlestar" was built for a post- 9/11 world. (This week, producers and actors even spoke at the United Nations about the ways the show reflects a range of current issues, from terrorism to torture.) To the original premise - a band of humans in space, chased by a race of rebellious machines called Cylons - producers added a layer of religious discord. The humans pray to Greek gods, while the Cylons are monotheistic. Their worldviews have been difficult to reconcile.

As the series went on, the emphasis changed. An arc about occupation and rebellion played off the situation in Iraq. And while the series wrapped before last fall's election, the current story line about a potential Cylon-human alliance feels like an Obama-era meditation on racial harmony. If the show ends on some overarching message, it might be that survival, in an unforgiving universe, demands cooperation. In the hands of the "Battlestar" writers, that's not nearly as maudlin as it sounds.

In part, that's because the series has been relentlessly dark, depicting what life might truly be like for 35,000 people crowded into ramshackle hunks of metal, wandering homeless through space with only algae to eat. In part, it's because of the show's layered characters and impressively raw performances. It's hard to find a stronger group of women on TV, from Katee Sackhoff's swashbuckling Starbuck to Mary McDonnell's Laura Roslin, humanity's dying president, who has convincingly shifted from democrat to autocrat to theocrat, and plays illness and disappointment with astonishing grace.

Edward James Olmos may have a few more crying fits than necessary - every few episodes, it seems, he trashes his admiral's quarters like a rock star on a drunken binge - but he embodies Admiral Adama as a gruff, respected leader who allows himself to be governed by emotion. James Callis, as the self-serving scientist Gaius Baltar, adds pitch-perfect comic relief. And most revelatory has been Michael Hogan as Adama's right-hand man, the volatile Colonel Saul Tigh, who repeatedly chooses loyalty over identity. More and more over the seasons, the show has seemed to be his, and there's little doubt that he'll play a crucial role in tonight's finale.

The end of a great series is always bittersweet, and heavy with expectations. Tonight, viewers will want closure on a list of lingering issues, from the mystery of Starbuck's rise from the dead to the fate of a half-human, half-Cylon child named Hera, who may or may not represent the future of humankind. It will be little surprise if a few characters die - a whole corps of them has just embarked on what they believe to be a suicide mission - and it might be nice to know if the last remaining humans in the universe find a new planet to call home, or simply wander around forever.

If we don't get every answer, though, we shouldn't be surprised. Throughout the series, "Battlestar" writers have always found ways to confound expectations. At the end of the second season, they shifted the ground rules with a one-year fast-forward. In last June's midseason finale, they took what might have been a natural series endpoint - the long-awaited discovery of Earth - and used it instead as a launching-off point. The planet, our planet, turned out to be uninhabitable, ravaged by nuclear war.

And so our dwindling band of humans was back where it started, lost in space, searching for a home. With one chocked-with-exposition exception, this winter's episodes have been less about a final destination and more about the psychological effects of a group of people fixed on a single hope, only to have it dashed. There was a shocking suicide, an attempted mutiny, a realigning of politics. Last Friday's penultimate episode dwelt largely on events before the series even began, in a series of flashbacks that saw several characters managing crises of an entirely human sort.

Given the weight of the series' mythology - describing the intricacies of human-Cylon relations can take a good half-hour, and I know because I've tried - it was bold of the writers to spend so many of their final hours on character studies. Some science-fiction junkies may have wound up disappointed, but for a show that transcends its genre, the choice was fitting. This show is about the journey, all the way to the bitter end.