'Ted' has a mean sense of humor, but a good heart 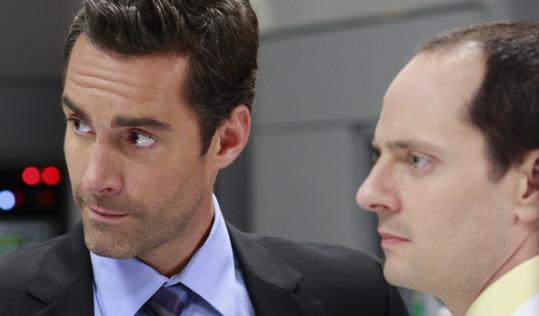 Before you call Pun 911 on "Better Off Ted," give it a try. The new ABC show is significantly better than its corny title promises. Naming this cynical corporate satire "Better Off Ted" is like putting a rubber clown nose on droll comic Steven Wright.

The single-camera sitcom is set in the moral freefall of a multinational company called Veridian Dynamics, which is choked in bureaucracy. Veridian is the kind of megacorp that does evil things, from engineering cryonics to figuring out how to use pumpkins as weaponry. One project in tonight's premiere, at 8:30 on Channel 5, has employees constructing office chairs from a fabric that's so itchy it forces workers to be productive.

Exactly how inhumane is Veridian? The company places toilet paper a little too far from the toilets in its bathroom stalls so that employees will use as little as possible.

Ted (Jay Harrington) is the handsome, friendly head of research and development who's legendary for saying yes to even the most ridiculous tasks. He's as slippery as his robotic boss, Veronica, played with amusing officiousness by Portia de Rossi - or is he? Ted may actually have a soul, one that he reveals in his flirtation with co-worker Linda (Andrea Anders) and in his heart-to-hearts with his adorable and centered preteen daughter Rose (Isabella Acres).

Created by Victor Fresco, "Better Off Ted" is loaded with potential. The writing has some of the gonzo wit that fuels the General Electric sendups on "30 Rock." And there are glimmers of the cubicle-culture surrealism that has flourished on "The Office" and on one of Fresco's earlier series, the excellent "Andy Richter Controls the Universe." The two lab nerds on "Better Off Ted," played with rich chemistry by Jonathan Slavin and Malcolm Barrett, have insane, nowheresville conflicts about which one of them is the boss of the other. Meanwhile, sweet Linda fills her desk drawer with the company's coffee creamers, small tokens of her secret rebellion.

What undermines this show about a heartless corporation is the show's heart, which it wears on its sleeve. Ted is too clearly a good guy, young Rose too frequently gives voice to wisdom of the ages, Ted and Linda are a little too conventionally sitcomesque together in their awkward rapport. "Better Off Ted" would be sharper if it were a little meaner - something like what we glimpse next week, when we see how Veridian's day care center is actually doubling as a child labor outfit, and how Rose actually has a flair for some rather unappealing business tasks. Small glimmers of the show's forces of good, rather than bright rays of virtue, would better serve the comedy. "Arrested Development" had that balance just right.

I'd be tempted to frame "Better Off Ted" as a response to the recession, as a comedy built to tap into our rage at the cold economic machine. The people making money at Veridian clearly have no scruples about ordinary people, including their own employees. But Ted and his research and development team still have their jobs. Their company is bankrupt morally, but not financially - yet.