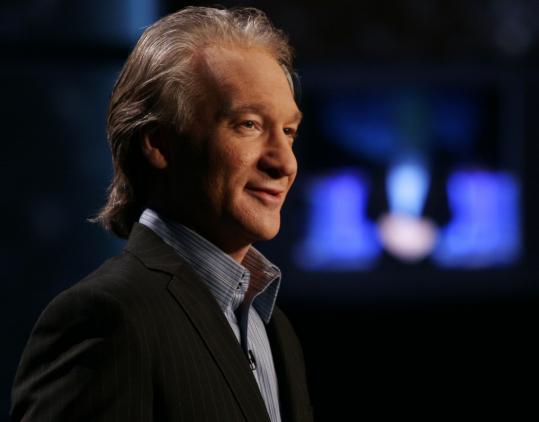 Bill Maher admits he hasn't seen much of conservative icon Ann Coulter lately. "We certainly used to be friends," says the comedian and host of the weekly HBO talk series bearing his name. "Just friends. I keep reading we were lovers. Not true. I would never have sex with a Republican." Lately, though he's been reading her attacks on liberals, Ted Kennedy, and nonbelievers, among others. Naturally, he's eager to press her on stage March 10 at the Wang Theatre when the duo appear as part of the touring "Speaker Series: The Minds That Move the World."

Q. So you seem to at least get along with Ann Coulter.

A. One thing I'd say with her in the past, even when I didn't agree with what she said, I always understood where she was coming from. After she explained it, it wasn't as crazy sounding as when she started.

Q. About the only thing you two might agree on is profiling at airports. You think there should be some form.

A. All police work is profiling. No policeman would say you can do your job without profiling. It just means some people are more likely to commit a crime. In the case of the airports, a young Muslim man who is shaking and sweating is a little more likely than a toddler or a grandmother.

Q. Will you really confront Coulter?

A. That is certainly part of my function - to call her out. Hold her feet to the fire and make her explain herself. If she can be Houdini, more power to her. If she can't, then throw some sunlight and disinfect this puppy.

Q. You just made this movie "Religulous." Is it the start of a series of Bill Maher-takes-on-a-particular subject film?

A. I have no intention of doing it again. I had one subject that was in my craw that I'd been trying to make for a decade. And it was a bit of a Moby-Dick for me. And I finally harpooned it. But once you've tackled the ultimate taboo, where are you going to go? As a friend of mine said the other day, "I think you made your point."

Q. Will you and Coulter talk before you do these public events - the one in New York and then in Boston on March 10? I tried to interview her but she never made herself available.

A. We're trying to get her on the show ["Real Time With Bill Maher"] this Friday or the next Friday just for a satellite. But she has become elusive as far as just that sort of logistical stuff. That's one reason why she hasn't been on our show. She also has security issues.

A. Yes, I do. For a while there I think she was living at an undisclosed location like Dick Cheney. I don't worry. But you can't put out a movie like "Religulous" and not have death threats.