Even more addictive in season two 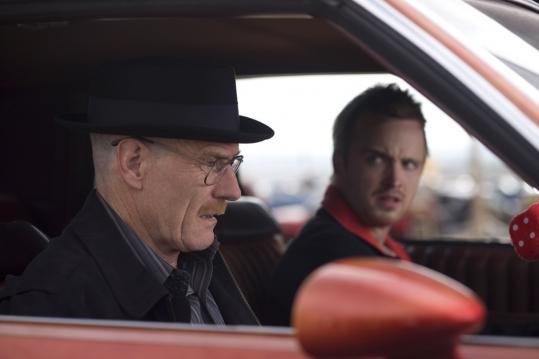 The show, Sunday at 10, is a vivid recession-era nightmare; wait to see good news on the desert horizon and wait in vain. Cranston's Walter White has terminal lung cancer, and he's desperate to financially secure his family before he dies. So the former chemistry teacher is secretly cooking and dealing meth to amass $737,000 - that's two college educations and a mortgage - for his pregnant wife and son. But every step of his wrong-headed plan draws him further into mishap and violence, and further away from the family he is trying to save.

Created by Vince Gilligan of "The X-Files," "Breaking Bad" raises the ante on the flip comedy "Weeds," which follows a suburbanite into the pot trade to support her kids. There are blackly comic moments on this show, particularly in the sniping buddy chemistry between Walt and his dim-witted young dealing partner, Jesse Pinkman (Aaron Paul). But pathos and tragedy are the dominant motifs. Meth is a hard, ugly drug, and the underground world in which Walt and Jesse conduct business reflects that. In the first few episodes of the season, they face off with an anarchic kingpin named Tuco (a convincing Raymond Cruz), and some of those scenes match "The Shield" in raw impact.

The darkest twist of "Breaking Bad" may be that Walt, once an underachieving pushover, is flourishing in the drug trade. Faced with his own mortality, venturing out of his family cocoon, he feels stronger than ever - so much so that his sexual appetite with his wife, Skyler (Anna Gunn), is out of control. He's a natural as he schemes his way into Albuquerque drug circles, cultivating an outlaw's demeanor and outsmarting armed street crooks. He is a remarkably good liar, and he fabricates with impressive improvisation whenever Skyler gets suspicious. By selling his soul to make money, Walt has found himself.

I struggled with "Breaking Bad" during the seven episodes of the first season. I was riveted by each hour, but I kept hearing the writers clearing their throats to make a Big Statement About These Times, just like that Michael Douglas movie "Falling Down." And Walt's meth-dealing success strains credibility, as does the fact that his brother-in-law, the cartoonish but likable Hank (Dean Norris), is a DEA agent who's going after the very same people Walt is supplying with meth. Talk about your forced coincidences.

But for this season, which will include 13 episodes, I'm going along for the crazy ride. "Breaking Bad" works as an unabashedly bold story about a man in extremis, told with the iconographic and ironic sensibility of Quentin Tarantino. To wit, a scene in a convenience store during episode 3, in which Gilligan deploys a Muzak version of Roberta Flack's "Feel Like Makin' Love" that perfectly accents the absurdity of the striptease it accompanies. Even the last names on "Breaking Bad" - White, Pinkman - recall the character code names from Tarantino's "Reservoir Dogs."

The acting continues to gain power as the first season's overarching sorrow about Walt's illness gives way to more complicated and furious emotions. As Walt becomes more aggressively bent on dealing drugs, Cranston digs further into the core irony of his character - that Walt doesn't feel like a loser any more, but he is losing everything that matters to him. Walt is a self-sacrificing hero and an idiot all at once. As Skyler, so alone in her pregnancy, Gunn also shines, along with a number of peripheral performers including Betsy Brandt as Skyler's narcissistic sister.

Paul, who also appears on "Big Love," makes Jesse into so much more than comic relief. He employs a monotone, dissonant voice that's irritating to listen to at length, but he keeps us in touch with Jesse's sad boyishness. Rejected by his own family, Jesse is finding a surrogate father in Walt. He's looking up to a man who is falling apart.