A classy, funny farewell from Conan 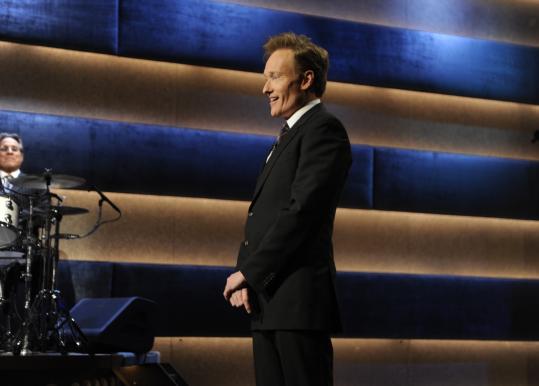 Conan O'Brien during his last ''Late Night'' broadcast on Friday. The show was filled with a medley of best-of clips and a performance from the White Stripes. (dana edelson/nbc universal)
By Matthew Gilbert Globe Staff / February 23, 2009
Text size – +

Conan O'Brien finished his 16-year "Late Night" run early Saturday morning with an intimate, heartfelt farewell. Alone at his desk, choking up with emotion a few times, he spent the entire final segment of his 12:35 show heaping thanks on the individuals who've helped him to succeed. It was a gracious, classy parting glance, an irony-free goodbye-for-now.

O'Brien, who'll move to LA and take over "The Tonight Show" on June 1, also promised that he won't "grow up" after the shift. "That's just not going to happen," he said to a standing ovation, addressing fears that he'd change to cultivate Jay Leno's more mainstream 11:35 p.m. audience. "This is who I am, for better or worse." O'Brien's final "Late Night" words: "Please come hang with me at the next gig. . . . We're gonna really knock it out of the park."

Among the many thank-yous, which he extended to his writing staff, his family, and the "warmth and kindness" of New Yorkers, O'Brien paid special tribute to Lorne Michaels. Michaels "took one of the greatest and most ridiculous chances in the history of the medium," O'Brien noted, by replacing David Letterman with "a completely unknown writer with no television experience and bad skin" in 1993. "Lorne Michaels singlehandedly made my career in television," he said.

O'Brien also sang the praises of Letterman, who "invented this late night show" and is "one of the most brilliant broadcasters certainly of the last century and this century and for all of time." Letterman, of course, will be O'Brien's primary competitor at "The Tonight Show," which made the homage even more powerful. O'Brien noted that "living in his shadow has been a burden and an inspiration for me for years."

O'Brien expressed fond but more measured appreciation for Leno, who'll move his act to a nightly 10 p.m. slot on NBC later this year. "I owe that man a great deal," O'Brien said. "I'm thrilled that we get to be friends for all of our time in television and that he will continue to be my lead-in."

Guests for the last episode included mascot Abe Vigoda, whom O'Brien released from a cage back into the wild, and Will Ferrell, who stripped out of his George W. Bush suit to reprise his dancing leprechaun moves. John Mayer appeared in a clip to sing "LA's gonna eat you alive," and longtime O'Brien show friends the White Stripes were in the studio to strum a sad duet on "We're Going to Be Friends."

Much of the last "Late Night With Conan O'Brien" - it was, the host told us, the 2,725th episode - was spent looking back over greatest hits. With former sidekick Andy Richter, O'Brien screened clips including his kiss with Rebecca Romijn, the gun-toting Ginger the dog, and Richter's naked visit to "Today." Along with O'Brien's favorite piece, a segment in which he visits Long Island baseball players who abide by 1864 game rules, the night's medley of clips was a satisfying representation of O'Brien's absurdist humor and his charm. They were a persuasive invitation to follow O'Brien to an earlier hour.