As Conan heads west, where will his humor go? 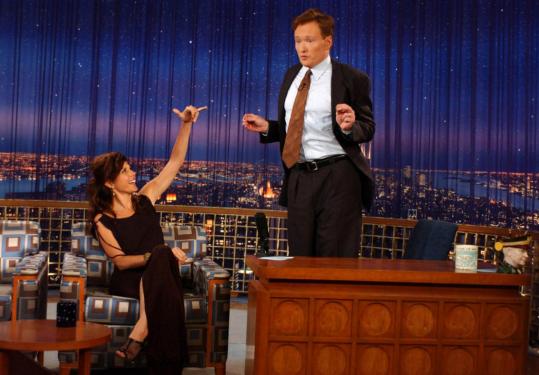 Some of us remember Conan O'Brien from college - not the Conan, but a Conan. He was a popular guy, but brittle. He was brainy and clever, but not an all-A student. Generally speaking, he wasn't at beer keggers with Jimmy Kimmel - a Jimmy Kimmel - because he preferred to preside over friends in his dorm room. Yes, he was a bit of a stoner.

And that Conan was a late-late-night kind of guy. His sense of humor was after-midnight material, filled with non sequiturs, irony, and things that only made sense when the rest of the world was sleeping. Everything he said seemed to have quotes around it. His cynical sensibility was more New York than LA, more Letterman than Carson, more Hawkeye Pierce than Mike Brady. Musically, his tastes were alternative, not mainstream.

What happened to that Conan? Hedge funds, probably, or advertising. But late-late-night network hosts such as the Conan O'Brien get to remain college guys for life, no matter how gray they become. They are our eternal undergrads. We grow up, but they hold out as irreverent, rude, off-kilter in the eyes of the straight world. These men - and, still, they are all men, to suit the largely young-male late-night audience - stay clowns for their generation. They get to mock Hollywood, politicians, and Average Joes on the street for us, while we rest up for another day of work.

But I am anxious about what will happen to the Conan we all know, the Howdy Doody-looking fellow with the big orange hair, the man who shot to the top years before "American Idol" was minting stars from out of nowhere. This Friday night on NBC, O'Brien will air his final "Late Night With Conan O'Brien," the 12:35 a.m. show he took over from David Letterman in 1993. And on June 1 he will inherit "The Tonight Show" in the more mainstream 11:35 p.m. slot, the legacy slot that comes with higher ratings expectations. He will move his act to the West Coast, to LaLa Land, and be fed by the hand that he bites.

Will Conan grow up? Will he have to be more an American cultural emcee than a captain of the bizarre? Clearly, Conan will need to set aside a few childish things, as he joked in a reference to President Obama's inauguration speech, as well as a few gratuitously weird things, to fit into the more prestigious time slot. On "Late Night" in recent weeks, he has been gearing up for the move, running a best-of feature and saying goodbye to such characters as "The Masturbating Bear." O'Brien joked that, at 11:35, the bear would be known as "the bear frantically trying to find his cellphone in his fanny pack," but the truth was implicit in the jest; "The Tonight Show With Conan O'Brien" will have to be less ludicrous.

Farewell to Vomiting Kermit, dispensing coffee and hot chocolate in spurts? And "the always disappointing" Pope with a box on his head? Will the pope underwhelm no more? O'Brien's musical acts, too - will they become more chart-driven or nostalgic? The first "Late Night" musical guest in 1993 was Radiohead; the last, on Friday, will be the White Stripes.

Last week, Norm Macdonald paid one of his untethered visits to "Late Night," during which he made Conan squirm by referring to the fact that Jay Leno nailed a nightly 10 p.m. slot on NBC, and will still serve as Conan's lead-in after the move. "It's stunning how Jay Leno outfoxed you again," Macdonald exclaimed. Conan loved it, and laughed as he saw the humor, even while he half-heartedly tried to change the subject. Will he be more ferocious about avoiding touchy subjects on "The Tonight Show"? Will he need to be a more party-line kind of guy?

Conan at 11:35 in LA will still be Conan, of course. And I imagine that he will maintain his trademark mock grandiosity, with which he is able to puncture the self-importance of his hosting role. He will continue to make meta remarks to his audience - "I'll win you back," he'll say after a bad joke. He will continue to do his "string dance," miming strings attached puppet-like to his hips. And he will continue to feature perverse shorts - James Lipton acting out the Christian Bale tirade, for example - and Abe Vigoda will continue to make appearances, maybe even after he dies.

After Friday, Conan will officially be aiming for the less groggy and less addled. He will be obliged to appeal to real adults. After 16 years, he is graduating.