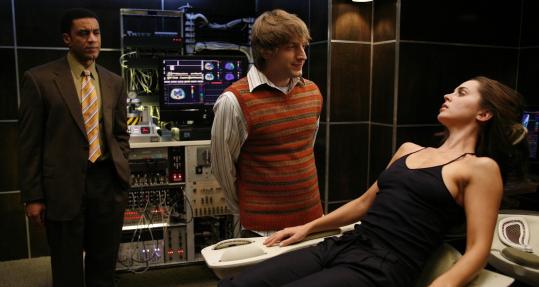 Humans who let an underground corporation empty out their brains and program them to perform secret missions? I suppose there's a way to read "Dollhouse," the new sci-fi series from "Buffy the Vampire Slayer" creator Joss Whedon, as a cautionary tale about the digital era. The drama, starring Eliza Dushku, presents personality itself as a kind of changeable software. Are we storing our very souls on our computers? Are our avatars our selves?

But as a drama, "Dollhouse" doesn't stand up to the broad interpretations it invites. The Fox show, at 9 on Channel 25, is a provocative construct, for sure, and, like "Buffy," it begs to be viewed in metaphorical terms. You could probably write an engaging master's thesis about all the Big Themes afoot - a generation turning into robotic Barbies and Kens, the role of memory in a deletable culture. But alas, you still wouldn't much care to put "Dollhouse" into your DVR queue. For me, Whedon's drama works only on paper.

The nefarious Dollhouse organization is run with an iron fist by Adelle DeWitt (Olivia Williams). Dushku's Echo is one of a troop of brain-drained men and women known as "actives," whom DeWitt rents out to fulfill the wishes (sexual and otherwise) of high-paying customers. After each job, the actives are "wiped" - that is, returned to a blank state of mind - and live as vapid dolls in a high-tech dorm until the next job. Essentially, they are slaves, even if they put themselves into the Dollhouse in the first place. FBI agent Paul Ballard (Tahmoh Penikett) is obsessed with saving Echo and taking down the Dollhouse. Why does he care so much? The back story is emerging very slowly.

In each episode, Echo is infused with a new personality in order to serve the client of the week. And she truly believes she is that person. She becomes an expert hostage negotiator to save a child, a trained midwife to deliver a baby, and an expert thief to steal art, all after some high-tech zapping by the Dollhouse's irritatingly ironic boy genius, Topher (Fran Kranz). She has sex with the clients, if that's part of the script (Whedon does not indicate whether or not the male dolls are having sex, too). But there's a ghost in Topher's machine: Echo keeps having memories, and we are meant to think that her former self - named Caroline - may be ascendant. Is Caroline going to wreak havoc in the Dollhouse?

The series is dogged by one big question: Why wouldn't the clients simply hire a real negotiator, or a real midwife, or a real thief? The purpose of the Dollhouse is unclear, even within the sci-fi context of the story line. And then, the show is further weakened by the fact that Dushku is a different person every week, which means she is nobody in particular, which means it's really hard to care about her. The actress does no more than a workmanlike job of becoming different people; she's not much fun to watch, in the way Jennifer Garner was in "Alias," when she donned costumes and accents to go undercover.

Maybe Whedon will develop "Dollhouse" into something more compelling, maybe not. As it is, the show makes for little more than an interesting entry in TV's ongoing chronicle of fractured identities, from the multiple personalities on "United States of Tara," the secret lives on "Weeds," "Breaking Bad," and "Dexter," and the split personality on the defunct "My Own Worst Enemy." Ultimately, you'll want to think about "Dollhouse" more than you'll want to think about watching "Dollhouse."