Raising their voices in a spirit of jubilation 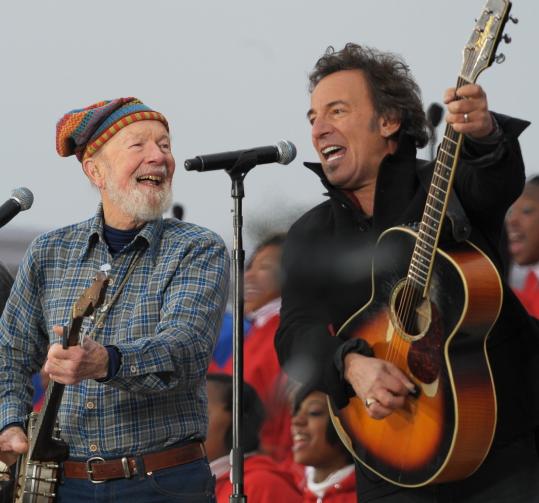 Given the acrimonious presidential race - and the fact that much of the entertainment industry supported Barack Obama's campaign - Obama's inaugural concert could have been a preening affair, a star-studded "I Told You So." And you had to admit, there was a gleam in will.i.am's eye as he performed "One Love" on the steps of the Lincoln Memorial.

But the "We Are One" concert, aired live on HBO and available to nonsubscription viewers, was less gleeful than grand, and sometimes practically austere. It might have been the setting, among the marble monuments, or the image of Lincoln's statue, overlooking the affair. Or the slate-gray sky and the bitter cold. Or the bulletproof glass and the Secret Service agents.

But this was also a deliberate choice: America noble and a little bit stiff, symbolized by a pair of bald eagles who fluttered awkwardly around their handlers. Bruce Springsteen set the tone when he performed "The Rising" with a gospel choir. This was an Important National Affair, an historical event.

It was, of course, so it felt right to hear Samuel L. Jackson address the racial symbolism of the day, and to hear Bettye Lavette sing "A Change Is Gonna Come," joined by a somewhat extraneous Jon Bon Jovi. It made sense that so many of the songs would be safely uplifting: "Lean on Me" (sung by Mary J. Blige in vertigo-inducing boots); "Shower the People You Love With Love" (James Taylor, joined by John Legend and Jennifer Nettles).

Still, there was palpable relief when Garth Brooks took the stage and injected some base-level joy, leading a massive sing-along of "American Pie" and "Shout," joined by a youth chorus in brightly colored sweatshirts. He waved to the Obama girls. They waved back. "God bless you, America! God bless the world! Love one another!" he shouted.

If this concert is remembered, it should be for those moments: Jamie Foxx doing a spot-on impression of Obama's Grant Park victory speech; shots of the Obamas shifting seats, or of Malia taking a snapshot.

Better them than Bono, who, bless his soul, takes it upon himself to represent the world. He injected the only current events of the day (calling the inauguration an "Israeli dream. And also a Palestinian dream") and thanked the Obama campaign for using a U2 song.

Obama's own speech was sober and weighty, as was Beyoncé's rendition of "America the Beautiful." But the penultimate act seemed to suit the day best: Pete Seeger, 89, standing by Springsteen and the youth choir, feeding the crowd the lines to "This Land Is Your Land." In his multicolored cap, gazing out on the scene, he wore an expression that veered toward glee.