A dating disaster for 'Momma's Boys' 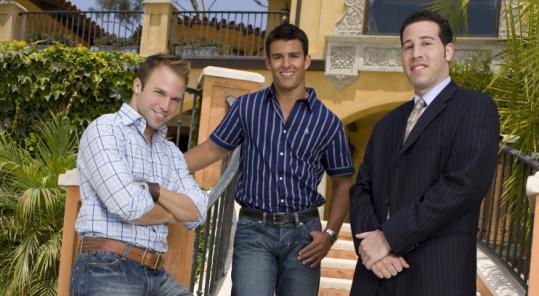 If Sigmund Freud were alive, and his practice were cut down to nothing by therapy-resistant insurance companies, and he became desperate, and he found his way to an executive job at a reality-TV production house in Hollywood, he might have proposed "Momma's Boys," a new dating series that premieres tonight at 10 on Channel 7. This is "The Bachelor: Oedipus Complex," with three young men shopping for girlfriends with their mothers in tow.

The show, executive produced by self-labeled momma's boy Ryan Seacrest, is totally stupid, but you knew that already.

The trio of bachelors seem like decent guys, but they're over-attached to their moms and proud of it. Hunky firefighter Michael, 25, lets his mother do his banking and make his bed every day. Real estate broker Robert, 24, has his mother buy his underwear. And hockey player Jojo, 21, has a mother who kisses his photograph and raves about his body and his lips. The show portrays these bonds as both cute and creepy, with a decided emphasis on the creepy. When the title sequence shows two silhouettes kissing, for a moment you almost wonder. . .

True to the Oedipal theme, "Momma's Boys" offers neither images of nor references to the fathers. The sons and their mothers take up residence in a spectacular Santa Barbara waterfront estate with 32 single women, and the women try to get close to the men while the mothers run interference. All of the women, of course, are bikini-wearing knockouts; the implant factor is huge. But only a few of them have brains, notably one named Megan, who has been cast as the uptight librarian type. Even though Megan is absolutely gorgeous, she wears clunky glasses and everyone treats her like a nerd. It's really funny.

But just having the meddlesome mothers on site is not enough for the makers of "Momma's Boys." Rather than creating plain old dumb kitsch, they throw a racist into the mix to make it into incendiary dumb kitsch. Jojo's mother, Khalood, quickly announces that she is extremely picky about her son's girlfriends. "I cannot stand a Jewish girl," she says. "I can't have a black girl. I have a lot of friends who are black, but I just can't see that." Also forbidden: Women from divorced families, women who wear a lot of makeup, women who are outspoken. "I need a girl just like me," she says.

Naturally, the producers show footage of Khalood's comments to the women, many of whom fall into the groups she has slighted. And so fireworks erupt, sides are taken, a black woman named Vita goes at it with the offending mother, and "Momma's Boys" becomes another button-pushing reality spectacle. By the end of the premiere, the big question asked by the narrator - "Who is really the most important women in any man's life?" - seems like an afterthought.