'Legal' comes to an offbeat end 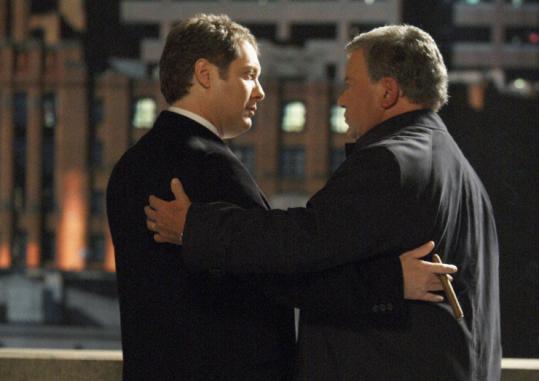 Monday night's "Boston Legal" series finale was a satisfying two-hour event built around two weddings and a takeover. The highlight was the marriage of James Spader's Alan and William Shatner's Denny, who decided to tie the knot in Massachusetts for medical and financial reasons since Denny was facing Alzheimer's.

"Take my hand, Alan, take my money," Denny urged his reluctant friend. It was the perfect way to leave the two men, whose bromantic love for each other has been the heart and soul of the series.

During its five-year run, "Boston Legal" had the reputation of being a series built primarily for older audiences. Famously, many of the leading cast members, including Shatner, John Larroquette, and Candice Bergen, were that rarity in prime time - over 50.

But David E. Kelley's dramedy, which spun off from "The Practice," was actually one of the least stuffy of TV shows, as it reveled in the kind of self-conscious irony and topical button-pushing more often found on, say, Comedy Central. "Boston Legal" was perfectly true to meta-form last week when one plot had Larroquette's Carl arguing a case against the networks for ageism. "The only show in which the leads are over 50," Larroquette said to the camera, "is Bo -. But that would break that wall."

At times during its run, "Boston Legal" pushed the envelope too hard regarding cultural issues, crossing over from satire to attention-getting silliness as the action popped in and out of courtrooms with abandon. But the writers' refreshing flirtation with the fourth wall was always a saving grace.

The finale contained a few trials and arguments, of course. The "Massachusetts Chapter of the Gay and Lesbian League" filed an injunction to stop Denny and Alan's marriage, claiming it was a mockery. Alan faced the Supreme Court to get access to an experimental Alzheimer's drug for Denny. And the wedding plans between Carl and Bergen's Shirley ran aground when their priest and rabbi got into a big fight. Explosive issues were batted around, in typical Kelley manner. But Alan and Denny and Carl and Shirley ultimately prevailed, and joined hands during a double wedding.

The takeover plot was also ridden with bluster, when Chinese investors decided to buy the law firm and rename it "Chang, Poole, and Schmidt." Infuriated, Shirley tried to prevent the sale with - what else - an injunction and then a trial. Her argument, about the Chinese threat to American democracy and human rights, was a bit of an odd parting glance for the series.

Fortunately, the final image will endure: Alan and Denny on the balcony, as always, this time arm in arm, dancing.