Grifters score with a light touch 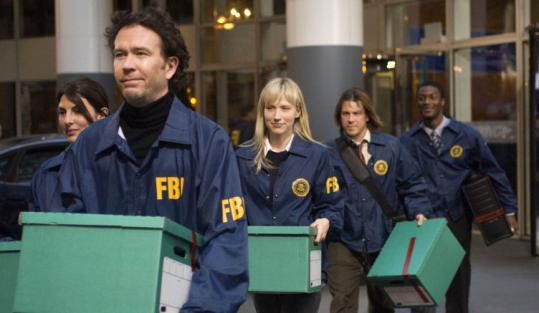 It's tempting to see "Leverage," TNT's new drama series, as populist wish fulfillment during the recession. Timothy Hutton plays the leader of a gang of con artists who steal from the selfish rich to give to the underdog. Hutton's Nate Ford, a former insurance investigator whose son died because his company wouldn't cover experimental treatment, is on a compassion tear against fiscal injustice and corporate greed. Essentially, he and his expert thieves provide grass-roots bailouts.

But, while accurate, that timely point of view could make "Leverage" seem less fun and free-wheeling than it is. The show, which premieres Sunday night at 10, does suit a time when tensions about who'll receive assistance and who'll pay for said assistance are afoot; but "Leverage" is the latest addition to an old, durable con genre that reaches from "Mission: Impossible" and "The Sting" to "Ocean's Eleven" and "Catch Me If You Can." It's really about the rush of the ruse, the theatrical virtuosity of successful flimflam, the wit of the trickster. Ford and his merry band of thieves do like redress; but they love scamming.

"Leverage," which moves to its regular slot on Tuesday at 10, most resembles a good British con series called "Hustle," which has aired in the states on AMC. The tone is similarly light, as the camera swoops and swans; the score playfully flirts with the "Mission: Impossible" theme; and the grifters form a happy dysfunctional family who wouldn't think of conning one another. But unlike "Hustle," whose thieves relied primarily on cleverness and forethought, the "Leverage" crew members are steeped in cool high-tech gadgetry, including a central-command office that may be even more spy-ready than the Counter-Terrorism Unit on "24."

Hutton is the semi-tragic center of the otherwise humorous cast. He is getting mad and getting even - and getting drunk too often - in order to suppress his grief about his son. The actor who won a best supporting Oscar as the sad kid in "Ordinary People" almost 30 years ago projects a weary mien, but, after a con, he's also able to deliver a hard-won smile. His helpers are Parker (Beth Riesgraf), a fickle thief; Alec (Aldis Hodge), a hacking genius; Eliot (Christian Kane), an all-purpose action guy; and Sophie (Gina Bellman), an actress. They bicker, but they bond.

Even when "Leverage" flirts with serious issues, including the mistreatment of an Army reservist who is shot in Iraq by a private contractor, the dramatic tone is whimsical and tongue in cheek. This motley crew is a kind of guerilla comedy troupe that can pick pockets and empty bank accounts, too.