As a talk-show host, Costello's aim is true 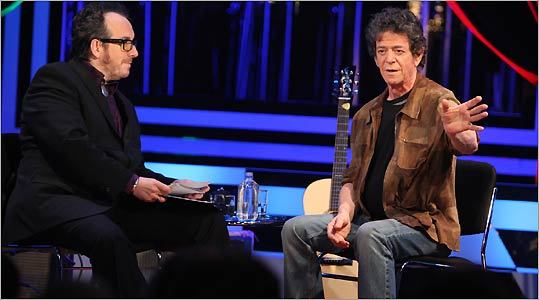 Sorry Sundance Channel, but the title "Spectacle: Elvis Costello With. . ." is off.

I know, I know, Costello has those trademark glasses. But the world "spectacle" connotes large-scaled arena shows, visual effects over music, and Andrew Lloyd Webber. And this enjoyable new music-interview series represents the antithesis of big, fat, production-heavy rock 'n' roll. "Spectacle: Elvis Costello With. . ." is an intimate weekly hour that finds host Costello and his guests turning away from the flash to talk about - and gush about, and play - good music.

The series, which premieres tonight at 9, is a kind of vacation from the wheels of commerce and promotion for Costello's guests, who will include Lou Reed, Bill Clinton, Tony Bennett, and Rufus Wainwright in the coming weeks. Interviewing his visitors on stage, Costello encourages them to celebrate their influences at length, no matter how obscure. The pace is leisurely, the subject matter loose.

Tonight, for instance, guest Elton John (one of the show's producers) looks back on little-known 1960s singer-songwriter David Ackles and Leon Russell, whom he calls "my biggest hero." He parses out the impact of the Band and Van Morrison on his 1970 album "Tumbleweed Connection," and he credits Laura Nyro for the tempo changes on the song "Burn Down the Mission." I can't think of many other places on music-oriented TV, which now ranges from "American Idol" to James Taylor on QVC, where host and guest can spend the better part of an hour geeking out about artists such as Nyro, who do not happen to have a new album in the marketplace.

Next week, Costello welcomes Lou Reed and director Julian Schnabel, who do have the "Berlin" concert DVD to push; but the pushing is ever so slight. Instead, the hour threatens to derail as the apparently drunk Schnabel recites by heart Reed's "Rock Minuet" and tells a remarkable vignette about his bond with Reed after the death of Schnabel's father. It's a compelling interview you would never see on late night. For his part, Reed talks about Doc Pomus and the "secret chord" in "Sweet Jane."

Costello opens each show, filmed before a live studio audience, by performing a song associated with his guest. Tonight, Costello plays John's "Border Song." Later in the episode, Costello and John noodle around with "Working in the Coalmine," the classic by Allen Toussaint, who just happens to be in the house band. And finally, they all do Ackles's "Down River." Next week, Costello opens with Reed's "Femme Fatale" and plays "Perfect Day" with Reed. For Clinton, who talks about the musical aspects of political speech-making and his affection for Elvis Presley, Costello starts off with "Mystery Train."

All the performances are rough and under-rehearsed, which makes them appealing. Costello also keeps the atmosphere relaxed during the interviews, never seeming too eager to interject his own commentary or jokes. His hosting skills are most evident with Clinton, who is engaging no matter how tired you might be of him after the endless election. "We're music crazy, both of us," John says about himself and Costello tonight, and "Spectacle" only confirms it.

Season 4 of 'American Horror Story' to be carnival-themed The fourth season of FX's creepy horror series is reportedly going to be set in a 1950's fairground carnival....
More in Viewer Discretion

Recent reviews and features from the TV critic.

The latest from the reporter and critic.
All critics and columnists
TELEVISION REVIEW
SPECTACLE: ELVIS COSTELLO WITH. . . On: Sundance Channel