In the company of spies

DVD set brings back the U.N.C.L.E. agents who made '60s audiences swoon 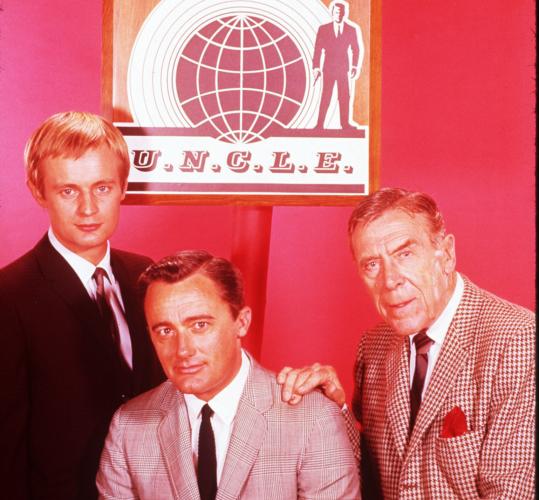 For slightly more than three years, from September 1964 to January 1968, "The Man From U.N.C.L.E." had one of the giddier rides in prime-time history. It went from near cancellation to cultural phenomenon (and a brief spot at No. 1 in the Nielsen ratings). In the process it created a spy mania on network television. So great was the show's popularity it even inspired a short-lived companion series, "The Girl From U.N.C.L.E."

Soon enough came self-parody and eventual cancellation. In its third season, "U.N.C.L.E." didn't just jump the shark. It pole vaulted it. Even so, for those of a certain age, the names Napoleon and Ilya (as in Kuryakin, Solo's sidekick) aren't much behind John, Paul, George, and Ringo in summoning up the onset of the '60s.

Last month Warner Home Video released "The Man from U.N.C.L.E.: The Complete Series." It comprises all 105 episodes, on 41 DVDs, with an additional 10 hours of bonus features. Completists will mourn the absence of the 1983 TV movie, "The Return of the Man From U.N.C.L.E." Well, let them mourn. In the meantime, there is much explaining to do for the uninitiated.

In the hierarchy of '60s spy TV, "U.N.C.L.E" stood alone. "Mission: Impossible" was too gimmicky, "I Spy" too jokey, "The Wild, Wild West" too anachronistic. Among "U.N.C.L.E." scriptwriters were Robert Towne and sci-fi master Harlan Ellison. Richard Donner directed four episodes in 1964 (making Solo and Kuryakin the lethal weapons of their day). It's no wonder Quentin Tarantino long spoke of making a movie version.

Robert Vaughn played Solo. Asked his opinion after reading the script for the pilot, he blurted out, "It's James Bond for television." In fact, Bond's creator, Ian Fleming, had briefly assisted in creating the series. His sole contribution was the name of Solo's character: a dashing, debonair secret agent who looks good in a tux and is caviar to the ladies. Sound familiar?

The unaired pilot (included in the DVD set) was called "Solo." Bond really was a solo operator, albeit with the inevitable supporting cast of M and Q and Moneypenny and the occasional appearance by CIA agent Felix Leiter (can't forget the US market!). And Solo was supposed to live up to his isolating name. Yet the beauty of the eventual title was the balance it struck between individual and organization

U.N.C.L.E. stood for United Network Command for Law and Enforcement. The organization's name simultaneously evoked Uncle Sam and the United Nations. During the show's run, tourists frequently asked UN guides for the whereabouts of U.N.C.L.E. headquarters. Despite the weekly thanks offered to the organization in the show's closing credits, it didn't exist. Nor did Thrush, U.N.C.L.E.'s thoroughly nefarious rival operation.

Emphasizing the organization did two things - and they are easily the two best things about the series. First, it played up Leo G. Carroll, in the role of professorial spymaster Alexander Waverly, the head of U.N.C.L.E. In a nice bit of foreshadowing, Carroll had played a similar part in Alfred Hitchcock's "North by Northwest" (1959). His droll avuncularity was an enormous asset.

Even better was David McCallum's Kuryakin. Lizardy and vaguely epicene, Vaughn's Solo had a slightly nasal voice and ever-present smirk. The overall effect was one of effete chilliness. Imagine a suave Hugh Hefner trading in his pipe and Pepsi for a Walther P38. Small wonder that in Vaughn's best-known film role, in "Bullitt" (1968), he would be cast as a villain.

Ah, but where Vaughn's Solo was chilly, McCallum's Kuryakin was cool - very cool indeed. If Julie Christie had the '60s' sexiest lower lip, as she most certainly did, then McCallum was a distant second. Add in his blond bangs, high cerebral forehead, and penchant for dark turtlenecks, and a teen idol was born. An air of distracted bemusement helped, too. When Kuryakin pretended to be the son of Lawrence of Arabia in a season two episode, it didn't seem at all implausible. McCallum could have been Peter O'Toole's more subdued Scottish cousin. Or Oskar Werner's.

McCallum received more fan mail than any actor in the history of MGM, the studio that produced "U.N.C.L.E." The show became the first beachhead of the '60s youthquake in prime time. It was a fluke. McCallum had all of two lines in the pilot. The producers quickly realized what genuine chemistry existed between him and Vaughn, a chemistry no less effective for being endothermic, and quickly built up the role. Ilya and Napoleon mixed together like tonic water and gin.

"U.N.C.L.E." had its share of gimmicks. Agents entered the organization's headquarters through the fitting room of a tailor shop. Viewers, like Thrush, never thought to wonder what a skyscraper was doing behind a storefront.

There were gadgets, of course, most notably agents' ballpoint-pen "communicators." Each episode was divided into four "acts," which seemed sort of classy; and transitions denoted by blurry rapid pans, which seemed very up to the minute. So did the fact of Kuryakin's being Russian: He was a one-man precursor of détente.

Heavy on flutes and bongos, Jerry Goldsmith's theme doesn't quite rank with John Barry's for the Bond movies or Lalo Schifrin's for "Mission: Impossible" (Schifrin would be called in to reorchestrate the "U.N.C.L.E." theme for the second season). But it holds up surprisingly well.

The guest stars are a fascinating bunch, if not always for the right reasons. Seeking to cash in on McCallum's youth appeal, the producers brought in the likes of Sonny & Cher and Nancy Sinatra - who sang a duet with McCallum. More common were fading movie stars: Janet Leigh, Vincent Price, Eleanor Parker, George Sanders. Most memorably, Joan Crawford concluded season three getting slapped around by Herbert Lom. Maybe he preferred wire hangers?

Sometimes familiarity breeds amazement rather than contempt. Yes, that really was William Shatner and Leonard Nimoy making a joint guest appearance two years before the debut of "Star Trek." Martin Landau, looking ahead to "Ed Wood Jr.," played a villain who dresses up like Dracula. A matinee-idol slender Rip Torn opened season two toasting marshmallows and bellowing, "It's not so simple to conquer the world today as it was in the days of Alexander the Great!" No, it wasn't, especially with Napoleon and Ilya on the case.