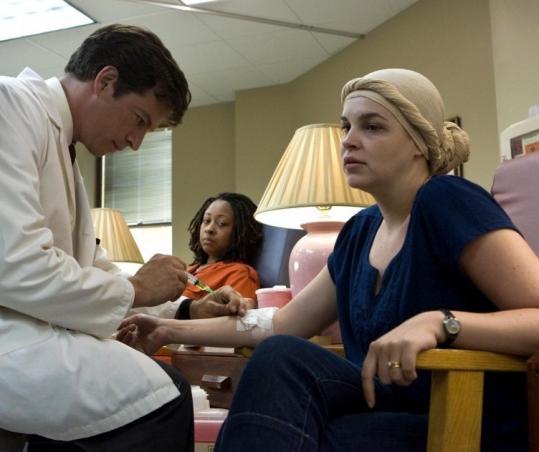 Of course it's earnest. Of course it lacks subtlety. Of course you'll shed a tear at some point. "Living Proof" is a new Lifetime movie about breast cancer, and all Lifetime movies about major illnesses are required to move the viewer at all costs. It's TV law.

"Living Proof," tonight at 9, is the story of Dr. Dennis Slamon and his epic crusade on behalf of the life-saving breast-cancer drug Herceptin. Based on the 1998 book "Her-2" by Robert Bazell, and executive produced by Craig Zadan, Neil Meron, and Renée Zellweger, the movie chronicles more than a decade of passionate research and advocacy by UCLA's Slamon (Harry Connick Jr.). But the familiar science story - the obsessive doctor, his crowded lab, his struggle to get funding despite bureaucratic hurdles - is nicely humanized along the way with emotionally charged vignettes about the specific women who found their last hope by participating in Slamon's clinical trials.

Slamon is a long-distance runner, both in sneakers on the UCLA track and in his mission to stop cancer. He pushes ahead with Herceptin, despite his own modesty and the obstacles presented by the drug maker , some of whose executives worry that the company will suffer if the drug fails. "We're not businessmen," he yells in a moment of frustration at a Genentech meeting, "we're doctors." In the late 1980s, Slamon gets fund-raising help from the extroverted Lilly Tartikoff (a breezy Angie Harmon), whose husband, NBC head Brandon Tartikoff, had been treated for Hodgkin's lymphoma by Slamon. Tartikoff enlists in the cause and throws glamorous charity events.

As "Living Proof" moves from 1988 across a decade, we meet the women who risk the quality of their final days to experiment with Slamon. Bernadette Peters is an artist, wife, and mother who has lost hope and is tired of chemo: "I refuse to die bald and throwing up," she says to Slamon. Regina King is a clothing designer who won't marry her boyfriend because she's convinced she'll die young. Tammy Blanchard, who played the young Judy Garland in "Life With Judy Garland: Me and My Shadows," is an emotional lightning rod as a woman whose mother (Swoosie Kurtz) won't let her give up.

Each of these actresses has a small amount of screen time, and yet as an ensemble they save the movie from colorlessness. Jennifer Coolidge is, as always, amusing in a brief turn as the gallows-humor gal who cracks wise during the Herceptin infusions, and Trudie Styler is remarkable as a desperate trial subject. Styler, who is married to Sting, has one of the most complex scenes in "Living Proof," when she meets privately with Slamon after the first round of trials.

Connick, meanwhile, is Connick. He's a likable if wooden presence, and his limitations as an actor are compensated for by the exuberance of the actresses, including Paula Cale Lisbe, who makes the best of her cliched role as the doctor's long-suffering but supportive wife. Connick is slightly more believable as a husband and father than he is in the expository scientific scenes, during which he has to explain how Herceptin works to his young assistant (Amanda Bynes).

"Living Proof," which Lifetime is presenting as part of National Breast Cancer Awareness Month, does not strain to be cheery. But the movie does have a positive ring, as it celebrates and honors the people who, with their persistence and spirit, have successfully taken some power away from a painful diagnosis.