A rhetoric-free look at the presidential candidates 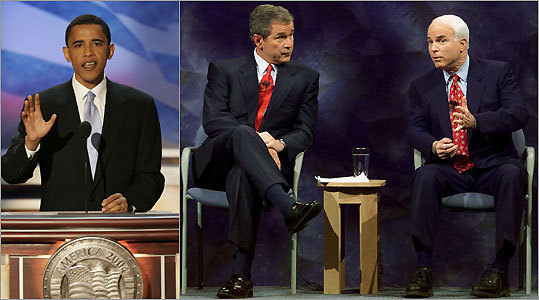 Listen to political rhetoric these days and you'd think John McCain and Barack Obama were naive rubes at best, corrupted crooks at worst. It's hard to remember that a good number of voters have found nobility in each of them.

So "The Choice 2008," the two-hour "" episode that premieres tonight at 9 on PBS, comes across as an attempt at a national mood booster, a sometimes-glossy reminder that, despite the unforgiving state of the campaign - and the cut-throat behavior of too many involved in it - each of these men offers something to admire.

The trick, from the producers' standpoint, is to take the long view of both men's political careers, focusing on their biographies and their political journeys. So the film unfolds as a timeline of key moments and the calculations behind them. We learn, for instance, that Obama's soaring Democratic National Convention address in 2004 was adapted from a stump speech he'd given to tiny crowds, years earlier, when running for office in Chicago. We hear about how assiduously congressional Democrats courted McCain to switch parties after the bitter 2000 presidential race. And we hear accounts of a 2003 meeting between his aides and Karl Rove, in which McCain decided to ingratiate himself to his own party, and volunteered to help with Bush's reelection bid.

Through it all, "Frontline" is unfailingly respectful to both men, but it doesn't steer away from controversy. Nor does it pretend that political success doesn't stem from serious design. We see how the internal battles Obama waged as the first black president of the Harvard Law Review presaged a legacy of working across party lines, and why his association with the Rev. Jeremiah Wright helped him rise in Chicago politics. We hear about his calculated plan to raise his US Senate profile - a reminder that, despite his short time in Washington, he has proven himself a savvy political player.

Painful-to-watch footage of McCain in a Vietnamese P.O.W. camp, meanwhile, reminds us of his strength of character. A retelling of the Keating Five scandal demonstrates his weaknesses. And the moves he made last year, to rescue his campaign from defeat, remind us that he can be a formidable foe.

Much of the material here has been reported before, of course (and many of the talking heads are veteran political reporters). The contribution of "Frontline" is to step back from the fray, putting the past into a sober context that feels historical, almost archival. The quotes from advisers tend to be telling, instead of merely boosterish. And perhaps because the candidates themselves aren't interviewed, these two hours are refreshingly free of campaign talking points. Sarah Palin and Joe Biden take up only a few minutes of airtime at the end.

The issues don't get much attention here, either; "Frontline" suggests, without explicitly saying so, that we're voting for character as much as for political views, specific solutions, or actions taken on the campaign trail. Whether or not that's true, it doesn't hurt to remind ourselves that, despite the noise and the sometimes-ugly messages they've approved, we could probably do far worse than either of these men.