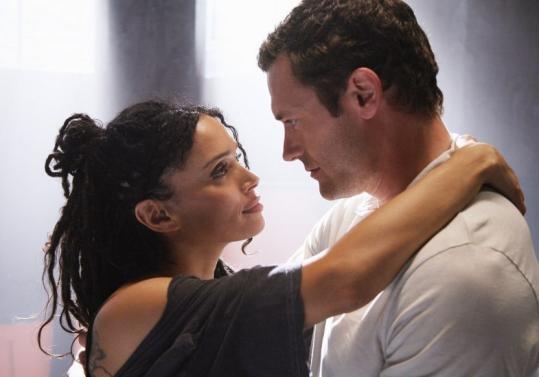 Jason O'Mara (with Lisa Bonet) plays a modern cop who gets caught in the '70s in ''Life on Mars.'' (John Clifford/ABC via associated press)
By Matthew Gilbert Globe Staff / October 9, 2008
Text size – +

I knew I liked "Life on Mars" when New York's World Trade Center appeared and I didn't feel like I was supposed to cry. ABC's new time-warp cop drama, based on a British series, re-creates the now-gone landmark to establish the fact that our present-day hero, Sam Tyler (Jason O'Mara), has woken up in 1973. It's an awe-inspiring moment, not an emotionally manipulative one, as David Bowie's "Life on Mars?" blasts over the soundtrack and Sam gazes up from the street at the recently built towers.

And there's a lot more to enjoy in the show's premiere, tonight at 10 on Channel 5, which is a really nice surprise. "Life on Mars" underwent creative turmoil on its way to this plum spot after "Grey's Anatomy," including a rejected pilot by David E. Kelley that was set in Los Angeles. But the current executive producers, the "October Road" team of Josh Appelbaum, Andre Nemec, and Scott Rosenberg, have righted the ship. They've pulled together a vivid cast and evoked the ideal tone - not comedy, not psychodrama, not sci fi, but an intriguingly evasive blend of them all.

In 2008, Sam is a New York cop trying to rescue his cop girlfriend, Maya (Lisa Bonet), when he's hit by a car. After he comes to, he's still a New York cop, but he's living in the early-'70s land of 8 tracks, Vietnam War headlines, and sing-songy commercials like "Plop, plop, fizz, fizz, oh what a relief it is." His fellow cops, sitting in a cigarette-hazed precinct, are eccentric enough to ignore his ravings about being from the future. They just think he's the strange new guy. Harvey Keitel is the brusque boss - the baddish lieutenant - who cares nothing about search warrants; Michael Imperioli, with a groovy handlebar mustache, is a competitive detective; Gretchen Mol is the token woman dismissively known by the guys as "No Nuts."

What's going on? The 1973 cop ensemble will solve crimes-of-the-week, and Sam's "CSI"-era awareness of forensics will come in handy; but the show will also slowly reveal the reason behind Sam's dislocation, as an ongoing story line. Like the "Lost" characters, Sam is uneasily unstuck in time, and the "Life on Mars" writers are going to tease out all of the strangeness of that notion before giving us solid answers. (Let's hope the solution has more internal logic than last season's failed time-travel effort, "Journeyman" on NBC.)

Tonight, there are "Singing Detective"-like hints that 2008 Sam is in a coma and dreaming the 1970s. Watching a black-and-white TV in '73, Sam sees a doctor looking out of the screen directly at him as if looking at an unconscious hospital patient. Sam also wonders if he has simply gone mad, or if he's embarked on some kind of therapy-induced nightmare, absurdly ranting to an armed murderer, "You're just a symbol of my anger, or a metaphor of my inability to commit."

The British "Life on Mars" lasted two seasons, and the time-travel mystery was finally solved. But the American version may take a different explanatory path - the producers have said as much - especially since, if successful, it will inevitably last longer.

O'Mara is yet another foreign actor (he's Irish) playing American on American TV with an impressive accent. He makes for a more traditional, less weasely lead than John Simm from the British "Life on Mars." He has square good looks, at moments recalling Grant Show, who was also recently dressing in similar 1970s duds in "Swingtown." O'Mara has both emotional presence and street-cop toughness, and he projects enough intelligence to spin ironic wit about his predicament in the middle of his own hysteria. "Send regards to my id," he says to the bullying, uncontrollable Keitel.

I love the fact that "Life on Mars" has arrived on the heels of "Mad Men" and "Swingtown." It's as if American culture is having a little check-yourself moment. By traveling back to the 1960s and 1970s, we're able to define and reassess who we are now. The smoking, the boozing, the overt sexism, the denial, the culture wars - they stare us in the face on these shows, signifying how far we have - and haven't - come.