On 'The Last Enemy,' Big Brother is watching everybody 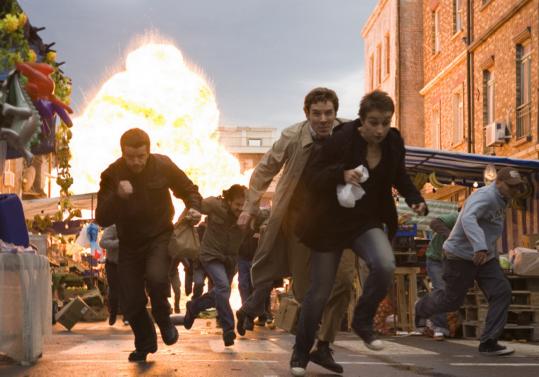 Before "Big Brother," the insipid spy-cam reality show, there was Big Brother, the terrifying, Orwellian authority figure constantly looking over our shoulder. "The Last Enemy," a compelling five-part "Masterpiece: Contemporary" thriller, works to revive all the once sinister associations attached to 24/7 surveillance. In our age of terrorism and debates about civil liberties, "The Last Enemy" proposes, George Orwell's "1984" vision has much timely relevance.

"The Last Enemy," tomorrow night at 9, is set in a slightly futuristic world, where a slick company named Inquirendo is trying to get the British government to adopt its new product, TIA, Information Awareness. TIA enables users to access personal info about all citizens through their mandatory ID cards, and it can simultaneously hook into the country's massive network of closed-circuit cameras and facial recognition technology. You can track almost all of everyone's moves at all times. And, of course, someone can track you as you track someone else's moves. "The Last Enemy" doesn't just give us the spies and the spied-upon; there are many levels of watching involved in the multi-tiered story line.

Our unlikely hero, mathematical genius Stephen Ezard (Benedict Cumberbatch), stumbles into the middle of the momentous deal-making between Inquirendo and the government. He's a fussy guy with OCD who wears germ masks on airplanes and washes his hands too frequently - like Monk, but not funny. Stephen has returned to London from China, where he lives quietly, to bury his brother, who was killed by a landmine on the Afghanistan-Pakistan border. Staying in his brother's flat, Stephen meets and falls for his brother's widow, Yasim (Anamaria Marinca), who promptly disappears. Inquirendo hires Stephen to help them sell TIA to the government; but Stephen uses TIA to search for his sister-in-law.

The "Last Enemy" plot is definitely complicated - five episodes' worth of complicated - but always comprehensible. As Stephen follows his sister-in-law, he is followed by a mysterious man played by Robert Carlyle, who is being followed by the government. And amid this web of surveillance is another related plot about Stephen's brother's aid work abroad, a deadly virus, gene pools, and the deaths of some 15 microbiologists in 15 years.

The miniseries requires close attention, which isn't always easy since the grim atmosphere is built on muted, metallic colors and somewhat monotone dialogue. There's no humor and brightness around the edges of "The Last Enemy." But, written by Peter Berry from "Prime Suspect 6," it fully rewards close attention, unlike too many brainy, paranoid thrillers that lose their way. And our understanding of who is good and who is bad changes up enough times to keep predictability at bay.

Cumberbatch is an unlikely leading man, and that is a plus, too. He was a great reluctant hero in "To the Ends of the Earth," a 2005 "Masterpiece Theatre" about a grueling sea voyage, because he looks like he's going to be a sniveling mess. You fully expect him to be a coward, and so you never take his daring for granted. He brings human nature kicking and screaming into the cool, paranoid world of "The Last Enemy."