On ABC, a night of series second chances 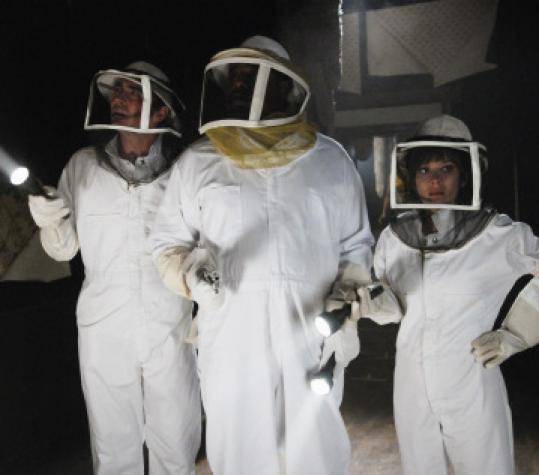 They are series, interrupted. Tonight on Channel 5, ABC is bringing back three 2007 shows whose freshman runs were completely blown off track by the writers' strike. Few viewers have probably been pining madly for the return of "Pushing Daisies" at 8, "Private Practice" at 9, and "Dirty Sexy Money" at 10, because they weren't around long enough to take root in our TV consciousness, and they've been gone for what is a TV eternity. The last "Pushing Daisies" aired in December 2007.

To me, these three shows ought to be back in fully realized form tonight. It's as if last season was their dress rehearsal, during which they could work out the kinks. They've been given a second chance to wow us. The writers and producers have had time to reassess their visions and, as with "Dirty Sexy Money," which returns with a mysterious Lucy Liu on board, to strengthen their casts. There are no excuses this time around.

The "Pushing Daisies" people, led by creator Bryan Fuller, have taken full advantage of their absence to do precisely nothing. And that's not a bad thing. If you liked the fairy-tale series last year, you will like it still. Lee Pace remains a sweetly recessive hero as the piemaker Ned, who can bring the dead to life; Anna Friel is whimsical as his untouchable love, Chuck.

And the entire cast is still encased in a fairy-tale-style world that may be mainstream TV's trippiest setting ever. In the premiere, the camera swings from a pie-shaped building to a bee-hive shaped building to Kristen Chenoweth's Olive alone on a hillside in a re-creation of the opening of "The Sound of Music." I admire this show - it's so original, and sequences such as the "Sound of Music" goof are right on. But I admire it more than I enjoy it. I find it hard to care about the emotional storylines, any more than I might care about, oh, Daffy Duck.

"Private Practice" looks like a mad-lib next to "Pushing Daisies." Shonda Rhimes's "Grey's Anatomy" spinoff is a fill-in-the-blanks kind of drama that tells cliched stories all over again, with no imagination. The show remains a poorly conceived piece of work that throws a whole mess of relationship and medical cliches at us and hopes for the best. Will Addison (Kate Walsh) date Pete (Tim Daly)? Or will Rhimes keep them apart longer for ratings purposes?

The "Private Practice" plots continue to zigzag uncomfortably between frivolousness - girl talk about shopping, guy talk about girl talk - and Important Medical Ethics Quandaries. These moral-conflict plots about the clients of Oceanside Wellness Group are tagged on to stop us from getting too grossed out by the outrageous narcissism of the characters. We are not fooled.

Tonally, "Private Practice" has not found its sweet spot. "Dirty Sexy Money," on the other hand, has. The soap opera fully owns its soapiness, in the same way "Gossip Girl" does. All of the characters are swept up in venality and betrayal and manipulation. Peter Krause, as the lawyer to the wealthy Darling clan, no longer seems bent on maintaining his integrity. He's one of the family now.

Unlike "Private Practice," "Dirty Sexy Money" doesn't strain to be redeeming. It's all about who's playing whom, and who will win in the end. Karen (Natalie Zea) is involved with Darling nemesis Simon Elder (Blair Underwood), but is she exploiting him? Brian (Glenn Fitzgerald), no longer a priest, is free to be open about his misanthropy. Patrick (William Baldwin) is still longing for his missing lover, Carmelita.

And Tripp? He's still played by the ever-sneering Donald Sutherland, which automatically renders anything he does worthy of note.