Rooting for the antiheroes 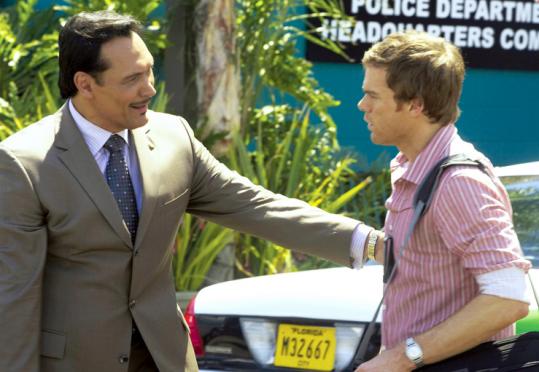 By day, he's an Average Joe, fashionable stubble on his chin and emotional armor under his vest. Just like most American men. But by night, he dons a mask of righteous fury and rids Miami's dark alleys of its vermin.

Watching Dexter Morgan on Showtime's amazing "Dexter" has been like watching the unfolding back story of a Batman-like superhero. A childhood scarred by parental death, an uncontrollable need to fight evildoers, a secret identity - all the classic comic-book elements have fallen into place across the seasons. When Dexter stalks his prey and binds them in plastic wrap, he's an almost-superhuman master of swift precision.

"Dexter" enters season 3 on Sunday at 9 p.m. with an increasing - and pleasing - urge to make us like the curious man-child at its center. When the series began in 2006, Dexter bore all the trappings of a creep - he was a morose twist on "American Psycho," or Hannibal Lecter with a tan. He was a hollow fellow, and unsympathetic, too, his compulsion to kill registering more than his strict moral code. But against the odds, the truly extraordinary "Dexter" writers, with actor Michael C. Hall, are turning Dexter into a character who is surprisingly easy to root for, who flirts with "normalcy" this season. He is, at the end of the day, of all things, a mensch.

That's a big accomplishment for a TV series, to turn a cold killer into a hero without inspiring groans, and to toy so ruthlessly with our moral instincts. Three seasons in, we now understand that Dexter isn't a reliable narrator, that he's not as alien or robotic as he says he is. His intimate voiceovers about faking human behavior now seem more comic than anything else. "I'm sorry," he says to the relative of a dead man this season, and then adds, only to us in voiceover, "that I killed him." The show's sense of humor is as dry as ever, and sometimes even silly - "Dexter, you've been working such killer hours lately," his girlfriend Rita (Julie Benz) says sweetly in the premiere.

Dexter faces a new enemy every season, kind of like Batman has new nemeses in each installment. The "Dexter" writers, including the author of the "Dexter" novels, Jeff Lindsay, deliberately and expertly string the story arc across a set of episodes. That way, the scripts only include relevant information, and the hours build to a crescendo, as they did last season with Dexter and Lila, his destructive - and now dead - lover. In this show, there's very little one-off material, those plots and characters that are included solely for the crime of the week. Everything is meaningful.

This season's arc is built around Dexter's unlikely friendship with Jimmy Smits's ADA Miguel Prado - "My new bestest friend," Dexter tells us mockingly. The truth about Prado is still blurry four episodes into the season - why does this powerful lawyer want to be so close to Dexter? We also see new sides of Dexter, as he begins to embrace spontaneity and as he succumbs to fiercely protective feelings about Rita and her kids.

In one scene in episode 3, when Dexter senses danger is afoot near Astor and Cody, a brother and sister who remind him of himself and his sister Deb as children, all of his senses - sight, sound, smell - become acutely aroused. His guardian instinct becomes finely tuned and intense, like an animal, or, yes, a superhero.

The impulse to protect his family comes much less naturally to David Duchovny's Hank Moody, the hero of "Californication," which returns in top form for its second season on Sunday at 10 p.m. He's no Superman, as the "Scrubs" theme song goes.

At the end of last season, Hank got the girl, as Karen (Natascha McElhone), his ex-girlfriend and the mother of his daughter, abandoned her wedding to another man to be with him. Now they are together, but the Hollywood world of weed, whites, and wine, as well as other women, still beckons to him. Hank has a conscience, but he also has a troublesome libido - something Duchovny, who went public with his own sex-addiction issues, has also been dealing with. The fact that Sunday's premiere is all about Hank's tender privates - he gets a vasectomy - is perfectly thematic.

Hall has gotten some due for his brilliantly ambiguous portrayal of Dexter, but I think Duchovny is still underappreciated for knocking this role out of the park. Hank Moody is convincingly gonzo, a brainy man desperate to let real feelings penetrate his numb exterior. He has so much admirable integrity, and he is all about the realness of the Upper East Coast; and yet he is crippled by cynicism and takes to Hollywood like a pig to mud. "Whatever you do," Hank yells to his daughter as she leaves for school, "don't be another brick in the wall."

Duchovny and McElhone accomplish the nearly impossible this season on "Californication," having chemistry even though they play a couple that has gotten back together again. Often, once the tension is gone, so is the acting spark. But of course, there will be challenges facing them - Hank's new writing project, about a rock 'n' roll producer, promises to throw plenty of temptation his way.

Will Hank and Karen survive? Or is fate against them, since fairy tales are impossible? Is the title of the show something Hank Moody does, or is it something that's being done to him?