Character and chemistry carry 'The Mentalist' 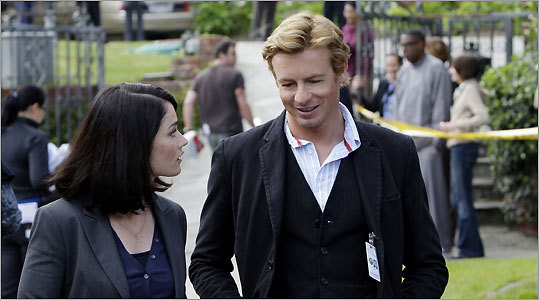 Among the most influential of TV figures? Sir Arthur Conan Doyle, the creator of Sherlock Holmes. He's the great mustachioed granddaddy of the contemporary crime and medical procedural, having shown Hollywood how an observant, intelligent, obsessive, and arrogant guy can follow a trail of crumbs to the culprit. So many current shows - the "CSI" franchise, "House," "Life" - play like homages to the deduction-crazed sleuth of Baker Street who's forever a step ahead of the rest of us.

"The Mentalist," tonight at 9 on Channel 4, revolves around yet another offbeat, Holmesian crime-solver. The CBS show has very little dramatic heft or distinction, but it's wily and brisk enough to engage you for an hour. The big twist: Our brilliant hero, Patrick Jane, is a former phony psychic who now assists the California Bureau of Investigation's homicide squad. Unlike the heroine of "Medium," he no longer lays claim to any supernatural powers, just an intense love of logic. Ever since his fake-psychic career led to personal tragedy, he has been in fraud recovery and do-good mode.

Simon Baker, who starred in "The Guardian," carries the show as Patrick, a smug guy who loves to beat the homicide detectives at their own game. Another foreign actor (he's from Australia) playing American - like Hugh Laurie on "House," Damian Lewis on "Life," and Anthony LaPaglia on "Without a Trace" - Baker has a mysterious, inner-directed charm that makes you want to watch him closely. He doesn't chew scenery, but, with his persistent smirky calm, he registers strongly in every scene. And, since Patrick's unfolding back story involves serious misfortune, Baker also projects a believable tinge of hidden sorrow behind his playful eyes.

Baker is backed by a likable ensemble, notably Robin Tunney (from "Prison Break") as the head of the homicide unit. She's irritable and annoyed by Patrick's methods, but, of course, she knows he's always right. The two have a fresh chemistry, which, I hope, does not become romantic and needlessly complex. It's pleasing to watch her tolerate him and occasionally have to drop her stiff veneer to laugh at his cheeky little jibes.

Unfortunately, like too many crime shows these days, "The Mentalist" suffers from some terribly weak crime plotting. The murder stories are hackneyed, the twists they take are eye-rollingly obvious or impossible, and the characters-of-the-week are stick figures. The stories seem dashed-off, and whodunit quickly becomes whocareswhodunit. You can see arrows blinking around the murderers from the first minutes they appear on screen. The show undermines its own strengths, as Patrick and the detectives waste their skills on paint by numbers.