'Fringe' aims for the edge

Abrams experiments with some cool science 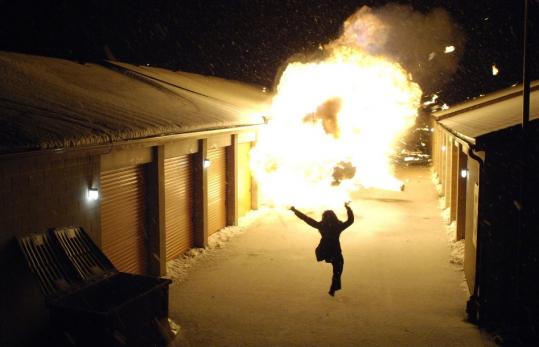 There's something irresistible about liquefied faces, don't you think? In the first minutes of "Fringe," J.J. Abrams's new Fox sci-fi series, we get to watch a planeload of panic-stricken passengers melt, most notably a pilot whose open-mouthed Munchian scream dissolves into torn flaps of skin. We instantly know we're in good TV-making hands, and an eruption of yellowy vomit - or was that just a melted tongue? - only confirms the feeling.

Tonight's 95-minute premiere of "Fringe," at 8 on Channel 25, opens with the confidence and hallucinogenic terror of director David Cronenberg's earlier films. The flight does land safely at Logan Airport - thanks, autopilot - but it contains only smoky vapors, skeletons, and a viscous glaze of what was once flesh. As he did with "Lost," Abrams grabs us straight away with a "Twilight Zone"-ish mystery that promises to push us to the brink of the imagination. Of storytelling ambition, it must be said, J.J. Abrams has no dearth.

But after the electrifying start, "Fringe" unfolds as an uneven, unwieldy piece of work that provides very few chills and thrills. There is potential here, and if anyone can pull a good series out of a slack, meandering premiere, Abrams can. Still, this eagerly awaited show is a disappointment, one that unsuccessfully strains to evoke the paranoid spirit of "The X-Files." As it skips - at times nonsensically - from twist to turn, "Fringe" never truly got me to care. The reveals were not revelatory.

Rather than an "X-Files" dynamic duo, "Fringe" gives us an improbable trio. Olivia Dunham (Anna Torv) is an FBI agent cast into the world of "fringe science" - mind control, teleportation, astral projection, reanimation - when her boyfriend (Mark Valley) is exposed to chemicals that turn his skin translucent. After fretting over his comatose body, which resembles a cellophane page in an anatomy text, she seeks out a former Harvard researcher familiar with the toxic condition. Roadblock: Dr. Walter Bishop (John Noble) has been in an insane asylum for 17 years, after going too far with human experimentation.

Thanks to some half-hearted plotting, Olivia gets Bishop's embittered but brilliant son, Peter (Joshua Jackson), to provide her with access to his father. Presto change-o, the three are conducting mad-scientist experiments in Dr. Bishop's old lab, which, conveniently, just happens to have remained untouched in Harvard's Kresge Building after 17 years. Is Olivia willing to enter a shared dream state with her boyfriend by ingesting psychedelic drugs, sticking a probe in her neck, and floating half-naked in a tub of water? Yes! "Excellent," Dr. Bishop exclaims with Vincent Price-like enthusiasm, "let's make some LSD!"

Torv, from Australia, is being promoted as Abrams's latest discovery in a line of actresses including Keri Russell of "Felicity," Jennifer Garner of "Alias," and Evangeline Lilly of "Lost." I can't say I saw more than a workmanlike action heroine in Torv, who resembles Poppy Montgomery from "Without a Trace." She and Jackson, Pacey from "Dawson's Creek," also seem mismatched as a pair. He's all charm and immature cynicism, as he rails against his father's far-out notions; she seems more adult, like his older sister.

For good measure, there are a few FBI types running around giving Olivia a hard time. Lance Reddick, from "Oz," "The Wire," and "Lost," lurks in her shadows to make such ominous statements as, "What happened on that plane might be part of something more dangerous than just simple terrorism." There is a nefarious corporate subplot, involving a company named Massive Dynamic and the sinister Nina Sharp (Blair Brown). And there are mentions of "The Pattern," of which the plane incident is a part. Presumably, "Fringe" will let clues about The Pattern emerge in increments, as our team goes about its weekly investigations.

And so "The X-Files" elements are in place. The score, at times reminiscent of "Lost" with its escalating strings, urges foreboding. The graphics, with "Heroes"-like location descriptors within scenes, prepare us to be wowed. And the science, which seems to have at least one foot in real possibility, promises to be cool. But still, "Fringe" just sits there, in need of reanimation by Abrams & Co. in the coming weeks.