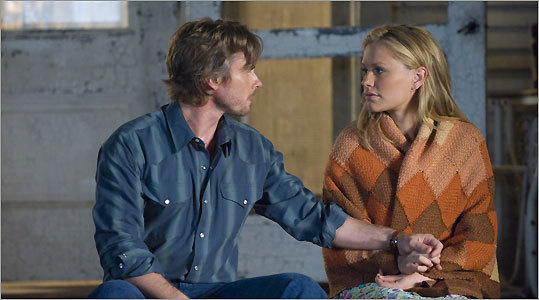 Watching vampire stories, you inevitably dwell on death, as human bodies are punctured, drained of spirit, left pallid and rubbery. Why on earth do we love telling ourselves these gory, nighttime tales of blood thirst, from "Dracula" and Anne Rice's vampire chronicles to the forthcoming "Twilight" movie and the new HBO show "True Blood," which premieres Sunday at 9?

I think Alan Ball, the creator of funeral-home drama "Six Feet Under" and now "True Blood," has a theory. We humans get a lift when it comes to considering the undead creatures of the night. Immortality ain't so grand, these stories tell us. Sure, death is sad, but eternal life - millennia of relentless need, the world dying around you, no food! - is sadder. We love to ponder the misery of vampires, to remind ourselves that we really don't want to live forever.

In Ball's droll, neo-gothic "True Blood," which is based on Charlaine Har ris's "Southern Vampire" books, the vampire community isn't willing to roll over and accept our pity. The premise of this promising series is that, thanks to the creation of synthetic blood, vampires are "coming out of the coffin" in America, fighting for equal rights, unwilling to be another of this country's hidden classes. Vampire activists appear on news shows arguing for the Vampire Rights Amendment, while the church proclaims "God Hates Fangs." Obviously, Ball is spinning a metaphor of gays in the era of gay marriage; but the "True Blood" setup will resonate with anyone looking for acceptance - that is, almost everyone.

Sookie Stackhouse (Anna Paquin) is the heroine of the piece, a telepathic waitress in the small Louisiana town of Bon Temps. When Bill Compton (Stephen Moyer) walks into Merlotte's restaurant asking for a bottle of Tru Blood, Sookie is openly thrilled about meeting her first vampire, if amused that his name is Bill and not something more exotic, like Antoine. She's part Buffy Summers from "Buffy the Vampire Slayer," a chosen defender of those in need; but she's also part Tracy Turnblad from "Hairspray," young and eager for excitement. She flirts with Bill, despite the anti-vampire bigotry of her friends and her boss, Sam (Sam Trammell).

Like the angels in the movie "Wings of Desire," Sookie is a mind-reader who unintentionally hears people's private streams of consciousness as she walks by them. But she can't hear Bill's thoughts; there is a solid boundary between the two, and she finds that irresistible. Like most vampires, Bill can "glamour" humans, and hypnotize them into submission; but Sookie is immune to Bill's skill. With him, she finds the independence and separateness she craves. They meet cute - she saves his life, he saves hers - and, with the courtly manners of a man who was last human in the American South in 1865, he calls on her.

The tone of "True Blood" is, like those death intros from "Six Feet Under," darkly comic, even while blood spatters all over the place. Just the name Sookie Stackhouse captures a sense of the humor - it's a slight parody of a typical young-adult heroine's name, like Pippi Longstocking, and it has the potential to be a bad pun on "suck-ee." The show is also filled with throwaway sight gags - a tabloid headline reads, "ANGELINA ADOPTS VAMPIRE BABY" - and there are local eccentrics who, like some of the Coen brothers backwoods creations, are amusingly thick-headed. Sookie's brother, Jason (Ryan Kwanten), for instance, is an intensely sexual numbskull who veers recklessly from one woman to the next. As Sookie's cynical friend Tara (Rutina Wesley) says to Jason, "You are a gigantic parody of yourself and you don't even know it."

You won't be drawn to "True Blood" if you don't like a heightened, almost cartoonish atmosphere. Paquin, giggly but calmly assertive, is something of an acquired taste as Sookie. To me, her overdone Southern accent has a comic emphasis, in the same way Kyra Sedgwick speaks with almost campy delight in "The Closer." I kept imagining Amy Poehler from "Saturday Night Live" mocking Paquin's drawl, but that never detracted from my enjoyment.

Alas, Moyer, a Brit, has less luck with his accent, as well as with his characterization. He makes Bill too dreamily ethereal, and I hope his performance grows more vivid and grounded with time. If we're going to be emotionally engaged by this couple, in the way we were by Rachel Griffiths and Peter Krause in "Six Feet Under," we need to see him as more than a vague specter. There isn't enough Buffy-Angel charge between the pair, yet.

Paquin and Moyer are surrounded by an engaging supporting cast, including Lois Smith as Sookie and Jason's liberal-minded grandmother. Wesley gives Tara's sharp tongue a sympathetic edge, as we see her sabotaging herself with naked honesty, and Kwanten is a force of blind nature as Jason lurches from breast to breast. One of the strengths of "Six Feet Under" was the coherence of its ensemble, and I'm hoping "True Blood" can find its way there, at least before dawn.