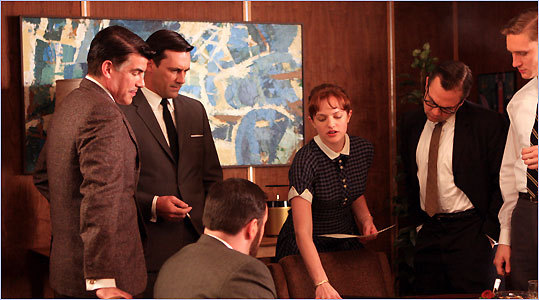 "Mad Men" is vacant - intentionally so. Fiercely so. The AMC drama, which returns as the conquering hero on Sunday after winning 16 Emmy nominations, and a pair of Golden Globes, is a tour de force of starched-white emptiness and emotional evasion. About New York ad men and their secretaries, wives, and paramours in the early 1960s, it's as psychologically flamboyant as a gray flannel suit.

Indeed, while the likes of "House," "Grey's Anatomy," and "In Treatment" make fireworks out of pathology, "Mad Men," back Sunday at 10, is psychologically withholding. You could look at this dreamily sepia-toned series and see nothing - just stock characters, precisely retro-styled with Brylcreem, pocket hankies, and A-line skirts, traveling from Scotch decanter to beige office couch like soulless puppets. You could easily miss the clues - the tight, overcompensating smiles, the eyes averted, the momentary lapses in compassion.

But that's the big twist of "Mad Men," which returns for season 2 in excellent form: There's a rich and active subtext in this series, you just have to discover it. Writer-producer Matthew Weiner follows a pre-dysfunction-era model of storytelling, in which the characters don't name their problems. They live them out, not quite understanding them, never quite able to ignore them. In the way viewers had to piece together "The Wire," we have to trace the hidden inner worlds of these mad men and madder women, using our own human nature to make sense of them.

The season opens on Valentine's Day 1962, more than a year after we saw ad man Don Draper (Jon Hamm) home alone on Thanksgiving, feeling like an orphan all over again. Don't expect an immediate update on the characters, most notably secretary-copywriter Peggy Olson (Elisabeth Moss), who was in denial about her pregnancy last season until she gave birth. As always, Weiner lets the facts float to the surface rather than diving down after them, just as the truth about Don - he's the son of a prostitute and stole the identity of a dead soldier - gradually emerged last season. On "Mad Men," we see a shark fin in the distance, and eventually we can envision the shark it belongs to.

While next week's episode is superior, and a deserved showcase for actor Vincent Kartheiser, who plays the slippery Pete Campbell, Sunday's premiere is primarily a reintroduction to the characters. We see Don, so indelibly played by Hamm, entering the midlife phase of his career, but still able to cast a seductive spell as he describes approaches for the Mohawk Airlines account. Don is a romantic when it comes to selling America, a man perfect for an era when advertising had more to do with philosophy than neuroscience. He understands the soul of the buyer - he knows profoundly the buyer's search for identity, trying to fill the inner void with a self patched together from the supermarket and department-store aisles. When Don waxes on about one of his ad accounts - "It's not about the majestic beauty of the Mohawk nation, it's about adventure" - he is like a poet who is able to weave gorgeous lies because he so fully understands life's painful truths.

Driven and secretive, Peggy also feels uncomfortable in her own skin, and she and Don share a tacit bond as she creates herself professionally and he mentors her. Peggy is hard on her inferiors, and in the premiere she berates Don's new secretary, who must suck it up and get back to work just as Peggy once did. If you want her to be the "Working Girl" underdog heroine, you will be disappointed. As Peggy, Moss artfully creates an awkward young woman who is willing away powerlessness, scornful when she sees in others the same wide-eyed innocence she is trying to exorcise in herself.

You can almost feel Weiner's giddiness when, by setting the premiere on Valentine's Day 1962, he gets to deploy one of the great historical props from the early 1960s: Jackie Kennedy's famous TV tour of the White House. As Jackie purrs on about White House restoration, seeming like both a breathy, girlish celebrity and a nascent symbol of strength, we see Betty Draper (January Jones) reflected on a national scale.

Like Jackie, Betty is growing up, a woman whose domestic life is picture perfect only on the outside, heading into an era that will demand much of her inner resources. Jones's skill as the childlike Betty is easy to miss, as she hides - or almost hides - her bitterness about Don's infidelities and her resentment toward her children for their dependency. But Jones is essential to the veiled, depressive tone of "Mad Men," and she delivered one of the series' most poignant moments at the end of last season, when she reached out to a boy in a suburban parking lot saying, "I can't talk to anyone. I'm so sad." The moment evoked Randall Jarrell's poem "Next Day," in which a mother wearily assesses her mundane life.

But the writer Weiner references in the premiere is the New York School poet Frank O'Hara, whose work calls out to Don when he sees a man reading O'Hara's "Meditations in an Emergency" at a bar. O'Hara, so open and direct, gives voice to Don's growing sense that he actually does have a center, a self, that love is not simply a promotional tool. As Hamm delivers O'Hara's "Mayakovsky" in voiceover, the entire show's guard comes down for a moment: "Now I am quietly waiting for / the catastrophe of my personality / to seem beautiful again, / and interesting, and modern."

It's as if Weiner is reminding us: If you think pre-Kennedy assassination America was all innocence and simplicity, look and think again.