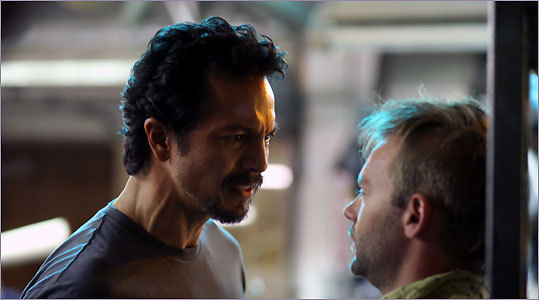 There's something off about the name of A&E's new scripted series "The Cleaner." It doesn't sound like the title of an intervention drama so much as the title of a light crime show about a detective housekeeper with a spray bottle of Formula 409 in her belt - a sort of "Murder, She Dusted." Or maybe it sounds like a TV movie about the life and times and earring of Mr. Clean, starring Jesse Ventura or Terry O'Quinn.

But then there's something off about the entire series, which premieres tonight at 10. Like the title, it doesn't quite work. Starring Benjamin Bratt as a recovering addict who heads up a team of rogue interventionists, "The Cleaner" is a concept that begs for - but doesn't altogether get - sophisticated treatment. The idea of a man forsaking legal and moral codes to save an addict from self-destruction is rich with potential, especially since it's based on the experiences of one of the show's producers, Warren Boyd. But "The Cleaner" paints its addicts and pushers by numbers, and with the primitive brush stroking of, say, "Dragnet."

The good intentions of the series can't be denied, of course. Bratt plays William Banks, a brooding husband and father of two whose approach to staying straight is to pay it forward. He heals himself by aggressively healing others. He and his team of recovering addicts, including a shady dude named Arnie (Esteban Powell) and a wealthy sports car-driving lady named Akani (Grace Park), join forces to pull strangers from the brink of disaster. Like the Fantastic Four, or some other clique of superheroes, they swoop in, drug their subjects without permission (yup, drug 'em), and move them to rehab. They mean well, with a vengeance.

But good intentions do not a successful drama make. In the premiere, a high school basketball star whose father died a year ago is now skulking around alleyways and smoking meth. He has shadows under his eyes, and, desperate for more drugs, he rifles through his mother's room to find and sell the jewelry given to her by her late husband. "Get the team together," William yells into his phone after he's commissioned by the teen addict's cousin. "We've got a kid in trouble." Meanwhile, the local cops turn a blind eye to any little laws the gang might need to break.

It's as if the writers have Afterschool Specials running through their veins. If this kid-in-trouble case is any indication of the cases to come on "The Cleaner," the show is going to deliver flat, merely instructive examples of addiction, without the kinds of particularity and lifeblood that could give them resonance. And that will negate any of the depth that Bratt brings to his character, a guy who's still on shaky ground with his family after years of misbehavior. William is written to be a tad annoying - he has frequent conversations with God out loud - but Bratt manages to make him sympathetic. The show is an extremely mixed bag, but he's an extremely likable extreme interventionist.