In for the 'Kill' 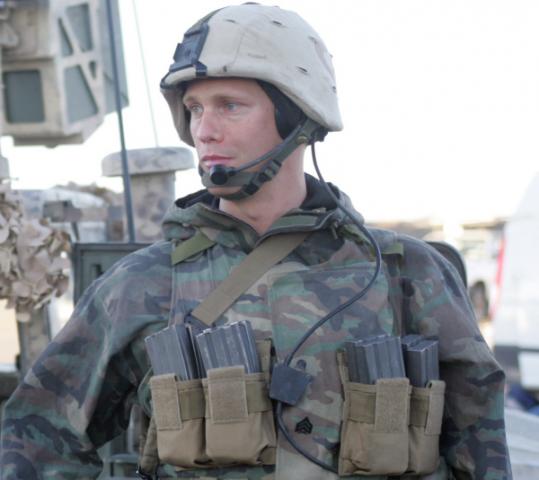 HBO's "Generation Kill" is remarkable. Adapted from reporter Evan Wright's journey through the first weeks of the 2003 invasion of Iraq, the new miniseries does full justice to its arresting, deceptively simple title.

For seven dense episodes, beginning Sunday at 9, this bleak drama drops us right into the grunt level of Marine action at the start of a war whose direction, five years on, remains vague. There we encounter in devastating detail a new generation of ironic but eager warriors, their hunger to be "in the game," as one puts it, and the way they are left exposed, perplexed, and expendable by their own leaders. "Generation Kill," adapted with Wright by "The Wire" team of David Simon and Ed Burns, is an epic artifact of the way we fight now.

With Wright (who is portrayed by Lee Tergesen from "Oz"), we intimately observe the deployments of the 1st Recon Battalion, sitting right beside the sleepless boys of the Bravo 2 platoon as they zoom through the sand in Humvee convoys, announcing "Yes, we are the conquering heroes" to Iraqi locals standing by ruined homes. And, as the days pass, and the superior officers fumble, and supplies wane, we can easily see the soldiers' dawning realization that war in Iraq will not be a slam-dunk against Saddam Hussein, as they face insurgents and jihadists and the vagaries of enemy fighters in civilian clothing.

But we don't just witness; that is the grim beauty and power of this miniseries. Like "The Wire," "Generation Kill" unfolds chaotically, with none of the narrative cues - explanatory dialogue, musical-score manipulations - we've come to expect from mainstream storytelling. As viewers, we are at times left to feel confused and poorly led, like the American soldiers with whom we travel. We yearn for a clearer narrative arc, just as the soldiers hunger for a solid idea of where they are going, and why. But in the first five episodes, all we get is an awesome and troubling accumulation of vignettes and moral challenges, including the shooting of peasant farmers and the destruction of a grammar school.

Like "The Wire," "Generation Kill" also gives us no formal introduction to the men - played by little-known actors - or what each one is responsible for. But slowly, and quite surely, the significant characters grow distinct and vivid, and the performances deepen. Corporal Ray Person is the most quickly distinguished soldier, a hyperactive Humvee driver who sings at the top of his lungs and issues stream-of-consciousness theories about war, "South Park," and why soldiers love to make homoerotic jokes. Played with an undercurrent of heroism by James Ransone, who was so out of control as Ziggy in season 2 of "The Wire," he is a motor-mouth absurdist comic.

There is an easy-to-spot buddy rapport between Person and Sergeant Brad Colbert, trash-talking each other as a sign of affection and massacring pop songs together during missions. As Colbert, Alexander Skarsgard, son of actor Skellan Skarsgard, delivers a breakthrough performance. Colbert's nickname is "Iceman," but beneath his still, Nordic features we can see a generous heart and a sensitive eye. As the miniseries moves forward, and the superior officers increasingly reveal their ineptitude, Colbert emerges as the de facto leader, the sensible one who knows he and his fellow Marines are "perfectly tuned Ferraris in a demolition derby." Tergesen is recessive and observant as Wright, chewing tobacco with his subjects, and Billy Lush is suitably irritating as a newbie desperate to do some shooting.

"He's a psycho," Person says about the kid. "At least he's our psycho."

Secretly, the grunts give their officers nicknames such as "Captain America" and "Encino Man." But the lieutenant they call "Godfather" proudly refers to himself as Godfather, speaking in what can only be called a screaming whisper to his men. Played with fierce edge by Chance Kelly, Godfather leads with the competitive fury of a high school football coach. His eyes are cold fire, and Kelly, like a few other members of this cast, deserves notice at Emmy time next year.

There is nothing mythic about this trip into war by Simon, Burns, and Wright, no thick "Band of Brothers" nobility or "Apocalypse Now" polemics. The miniseries is a gathering of rich little moments on the road to nowhere - Person recalling that his grandmother pinned his photo on a "Wall of Heroes," Wright shivering uncontrollably from an adrenaline rush after a battle, an Iraqi father apologizing to the troops when they kill his innocent daughter, Colbert calling a priest a "shill of God." Laser-lit and sand-blasted, "Generation Kill" defines a new kind of hell.