A tribute of stories, tears for TV's Russert 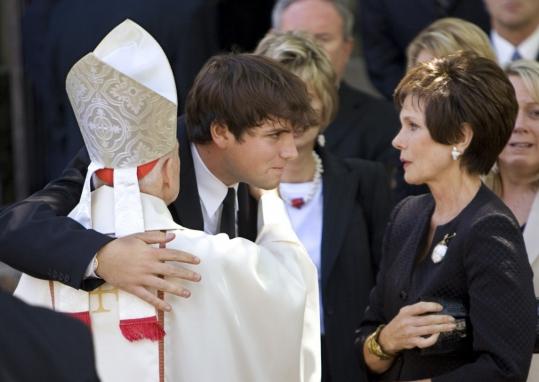 WASHINGTON - Tom Brokaw lifted a bottle of Rolling Rock beer in tribute to fallen colleague Tim Russert, part of a day of tributes that brought together the nation's top journalists and politicians and even Senators Barack Obama and John McCain.

Russert, the NBC "Meet the Press" anchor who died of a heart attack Friday at the age of 58, was eulogized at his funeral and a memorial service that was televised on MSNBC.

"We are going to do it Irish style," Brokaw, who pilfered the Rolling Rock from Russert's cooler, said at the memorial service held at the Kennedy Center. "There will be some tears, some laughs, and the occasional truth."

Speakers included Maria Shriver, Mario Cuomo, Mike Barnicle, and even the nun who taught Russert in the seventh grade. It ended with Russert's 22-year-old son Luke.

"He regarded a day greeted without real enthusiasm as a sadly lost opportunity," said Cuomo, the former New York governor for whom Russert worked as an aide in the early 1980s.

Shriver, California's first lady and one of the Kennedy family, recalled how Russert tried to help get her daughter into Boston College, which Luke attended.

Shriver had that covered, although her daughter landed on the waiting list.

NBC News anchor Brian Williams told how Russert went to the best salons for haircuts and "on the day he got it done he looked outstanding for 60 to 90 minutes."

The crowd entering the Kennedy Center heard music from Russert's iPod, including "Free Bird." Among those in attendance were former president Bill Clinton and Senator Hillary Clinton, former senator Bob Dole, Republican of Kansas, and Secretary of State Condoleezza Rice.

Obama and McCain, the two men vying to be president, sat next to each other, as requested by the Russert family.

"It is not easy to preach a homily for Tim and to communicate the feelings we all share concerning this remarkable man, for he was truly one of the great communicators in American society," Cardinal Theodore McCarrick, archbishop emeritus of Washington, D.C., said in his homily. Russert also served as the Washington bureau chief for NBC News.

A political insider, Russert was known for conducting tough interviews of Washington's most powerful politicians, yet he evoked an everyman quality that showed his blue-collar, Buffalo, N.Y., roots.

The funeral service at Holy Trinity Catholic Church in Georgetown was private, but a loud speaker broadcast the service to about 100 onlookers standing along the tree-lined street. A man wearing a kilt played the bagpipes as the crowd arrived, and delivered a rendition of "Amazing Grace" as Russert's casket was taken from the church.

"My dad was my best friend," Luke Russert said, his voice strong and clear. "To explain my bond with my father is utterly impossible to put into words."

He said that whenever he did well on a school assignment, his father would yell, " You smoked 'em, buddy!"

He asked the crowd to imagine a special edition of "Meet the Press" this Sunday in heaven, perhaps with a debate between Alexander Hamilton and Aaron Burr or John F. Kennedy and Barry Goldwater. He even suggested a talk on the need for a new political party involving Teddy Roosevelt, the former president who later ran unsuccessfully for president as a member of the Bull Moose party.