Cartoon kids are capable of anything 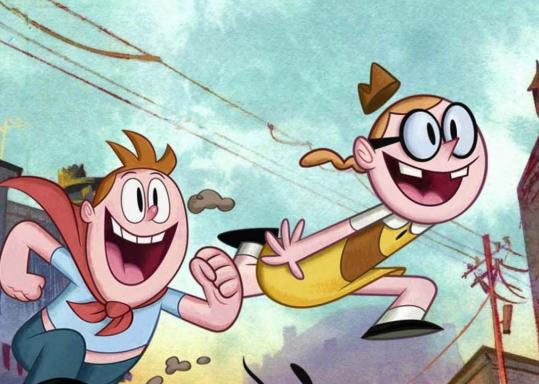 I've been trying to remember if, during my TV-filled youth, there was ever a female heroine quite like Bessie Higgenbottom, the Amy Poehler-voiced star of Nickelodeon's new cartoon "Mighty B."

If there was, she didn't stick. The cartoon girls I remember were mostly Barbie-doll types, like Josie and the perfect-looking Pussycats. The live-action kids could be off-puttingly whiny, like Jan in the "Brady Bunch" reruns. The nice thing about Bessie is that, while she's an underdog, she doesn't seem to know it. She's awkward, confident, and unapologetically herself: a 9 3/4-year-old Honeybee Scout with glasses, a mild speech impediment, still-growing-in front teeth, and a powerful sense of will.

She is, in short, the cartoon embodiment of the "Caitlin" character Poehler performs on "Saturday Night Live": a hyperactive kid who used to run gleeful circles around Horatio Sanz. Except that Bessie has the advantage of being animated, which means she has a broader world at her command. And because she's just un-self-aware enough to believe she can do anything, she usually finds a way.

Nickelodeon's latest animated venture, which premieres this morning at 10:30, arrives with a cartoon pedigree, even beyond the presence of Poehler, who serves as both star and executive producer. Its co-creators, Cynthia True and Erik Wiese, are veterans of "Fairly Odd-Parents" and "SpongeBob SquarePants," respectively. And this show shares a lot with those two hits: an art style that borders on hideous, a snarky sense of humor.

The animation also has a bit of a "Tom and Jerry" throwback quality: characters twisted, pulled, and flattened beyond recognition before they pop back to regular form. In one episode, Bessie discovers she's 1/16 of an inch too short to ride on "The Punisher," a wicked roller coaster. (She feels ready to graduate from the junior coaster, "Lil' Pun.") So she sneaks into a taffy factory and gives herself up to the machinery.

It's possible that Poehler, who's about as skilled a comedian as they come, could pull off some of this physical comedy in a live-action sketch. But she's funny when she's animated, too. In "Mighty B," we see Bessie's fantasy world come to life. In her quest to collect all of the Honeybee badges possible, she fancies herself a classic superhero, complete with cape and voluminous muscles.

The real people around her don't generally get in her way. She has a tired mother who gives in to her persistence and an adoring younger brother named Ben (voiced by Andy Richter, who also seems to have been born to play a hyperactive, animated child.) She butts up against some nasty members of a little-girl clique, including a nemesis named Portia. She adopts a stray dog named Happy, who has somehow lost one ear.

Like Bessie, he's indefatigable. That's what I like best about this kid, and the teensy lesson in the show for real-life girls: Good things can come your way if you ignore the doubters and you lack the good sense to give up. Bessie does get to ride on the Punisher, and though she staggers off the ride more than a little bit ill, she's as proud of herself as she ought to be. When you're an awkward little girl, victory isn't always pretty. But it's still a beautiful thing.