Lots of outrageousness, not enough laughs 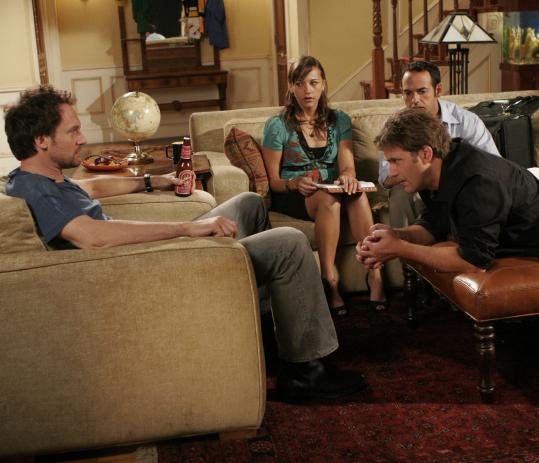 "Unhitched" really, really, really wants to shock you. The opening scene of this new Fox sitcom has an orangutan trying to rape our hero while he's busy making love to a woman who happens to be obsessed with apes.

And I guess the scene is a little shocking, if you find any TV humor particularly scandalous these days. It's like "Lancelot Link, Secret Chimp: SVU." But the bit, like too much of "Unhitched," which premieres tomorrow at 9:30 p.m. on Channel 25, just isn't funny. The creator-writers, Mike Bernier and Chris Pappas, are clearly proud of their bad-boy eagerness to offend, and that may be why their show is executive produced by the Farrelly brothers of "There's Something About Mary." But alas, in their politically incorrect glory, the guys forget to bring on the laughs.

Outrageousness by itself isn't necessarily humorous, unless, perhaps, you're 12. The godfather of "shock" comedy, Howard Stern, knows this, as he tries to navigate and upend the male psyche. And Matt Stone and Trey Parker deploy irreverence and bodily functions on "South Park" in the process of skewering American culture. But the off-color material on "Unhitched" doesn't resonate much beyond "Look at how deviant we can be."

The foundation of the show, which is set in Boston, is ordinary sitcom fare about newly single adults and their dating woes. The approach is very much like "Seinfeld," with four friends each having his or her own wacky subplot in each episode. Jack "Gator" Gately (Craig Bierko) is the central character, an everyman of sorts who's having a hard time signing his divorce papers. Next week, he falls for a woman who has a "skin tag" on her back, and he just can't get past it. Like Jerry Seinfeld, he fixates on the little imperfections.

And Freddy (Shaun Majumder) is a romantically childlike doctor. Most of his jokes depend on his Indian accent and his misunderstandings of English.

Between its sophomoric gags and singles-sitcom cliches, between all the drunken women and the devious prostitutes, "Unhitched" manages to come up with a handful of successful lines. And the Boston references to the Celtics, Avalon, and the Charles Hotel offer local viewers some small diversion. But the show doesn't ever really develop a comic center, or a heart. It's just a bunch of pointless monkey business.