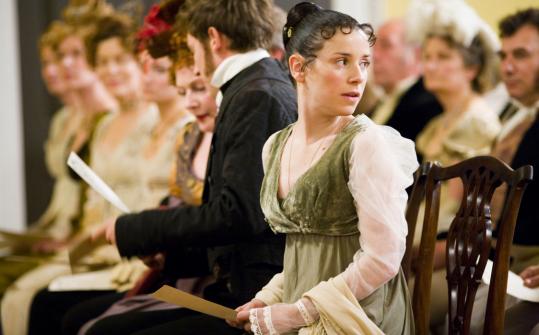 Furthermore, Anglophiles, grad students, and Whole Foods shoppers, the hosting duties for "Masterpiece Classic" - previously held by Alistair Cooke and Russell Baker - will now belong to a pop culture icon. Gillian Anderson, Scully from "The X-Files," will introduce the show's adaptations of Dickens, Trollope, and the gang, facing us with her flowing red hair against an abstract red backdrop. Her qualifications? Not only has Anderson given strong turns in "Bleak House" and "The House of Mirth," but she has actually resided in England at points in her life. She has cobblestone street cred.

As if to squash viewer fears about the alterations in the series, PBS is introducing the "Masterpiece" rebranding with "The Complete Jane Austen," a months-long string of new and old adaptations of Austen novels. Austen is like a beloved rock star on PBS. And the Austen series will include an all-time favorite, the 1995 "Pride and Prejudice" miniseries starring Jennifer Ehle and Colin Firth, as well as an Austen biopic called "Miss Austen Regrets." The series begins tomorrow night at 9 on Channel 2 with a new take on "Persuasion," Austen's last completed novel.

A fan of "Masterpiece" and its efforts to endure in the changing TV landscape, I wish I had been more enchanted with this "Persuasion." Not only does it pale in comparison with the extraordinary 1995 version, but it fails to deliver in its own right. The pace is too fast and, by the end, choppy; the writing, by Simon Burke, is reductive; and the casting is misguided. Certainly the sets and costumes are gorgeous, and the more satirical comedy involving Sir Walter Elliot's desperate snobbery has its moments, but on the whole the movie is hurried and forgettable.

In "Persuasion," unlike in Austen's other novels, the narrative begins with a romance that failed. Eight years before the start of the story, Anne Elliot (Sally Hawkins) and Frederick Wentworth (Rupert Penry-Jones) were in love, but Anne was persuaded by family friend Lady Russell (Alice Krige) to refuse the then-poor seaman. Now a wealthy captain, Wentworth comes back into Anne's life, still bitter that she allowed herself to be swayed from him. At a dinner whose guests include Anne, Wentworth is asked what he is looking for in love: "A woman who knows her own mind." Ouch.

With Austen, the getting there is the point, since we all know where her stories will end up, more or less. The beauty of her novels is in the journey toward her characters' inevitable admission and acceptance of true love. The changes of heart, the dawning of reality over perception, the revelations of heroism and villainy - these must all happen gradually. With too much concision, and not enough willingness to savor, the whole endeavor comes off like a math equation.

This "Persuasion" seems to leapfrog through all of its plot points - Wentworth's flirtation with others, the courtship of Anne by the Elliot family heir, the people in the pair's lives who remind them that life is too short to waste. The secondary characters are little more than stick figures. And the script telegraphs its themes along the way, rather than letting them emerge, as the word "persuasion" pops up one too many times.

As Anne, Hawkins is right enough. She musters dignity in the face of regret and spinsterhood, never making Anne pathetic. But Penry-Jones is far too pretty to be Wentworth. He doesn't have wisdom and pain written into the lines of his face, as did Ciarán Hinds as Wentworth in the 1995 version - indeed, he has no lines in his face. And, as Mary, Anne's hypochondriacal sister, Amanda Hale completely forsakes the humor of the character. Like so much about this production of "Persuasion," she takes the fast track to mediocrity.